International cricketers Tom Latham, Henry Nicholls and Matt Henry got a warm Diana Isaac welcome and a cup of tea to fortify themselves as they prepare to take on Bangladesh at the weekend.

The international cricketing stars are all Cantabrians and they delighted the crowd with a visit and question and answer session at a special event organised by cricket broadcaster Spark Sport.

Questions ranged from wicket preparation and coping with nerves and sledging, to whether the commentators ever ‘dried up’ in the commentary box.

Craig McMillan said he hadn’t dried up yet – but didn’t rule it out.

“Other commentators like Blowers (legendary commentator Henry Blofeld) liked to talk about the seagulls, but I haven’t come across a species that I’d like to specialise in yet,’’ Craig said.

Frankie, who is clearly blessed with the gift of the gab, said becoming a little bit tongue tied at the end of a long day commentating was a hazard of the job. 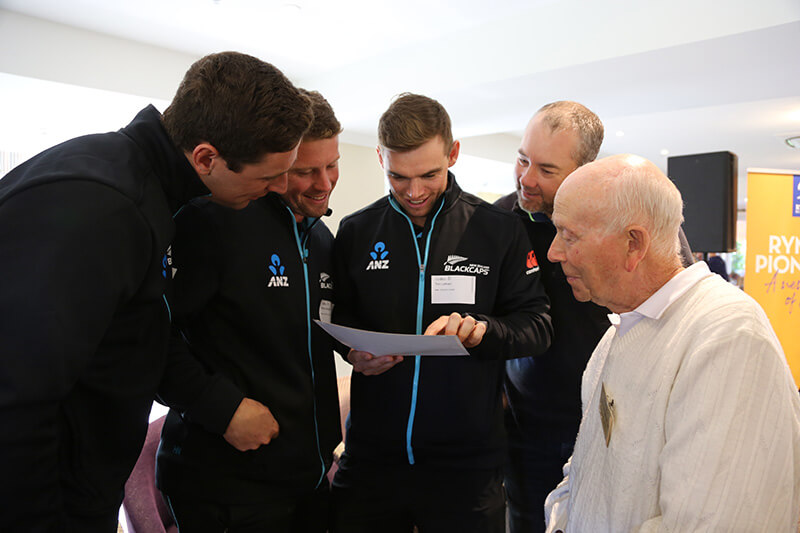 Tom Latham, Matt Henry and Henry Nicholls revealed they all went to competing Christchurch high schools but have played together in representative teams since their teens, before going on to international careers together.

Asked whether they ever got tired of each other on long tours, the diplomatic consensus was that it is a perk of the job to be able to play and tour with good mates.

When they are not playing cricket they are keen golfers, and they joked about turning professional when their cricket days ended.

Asked whether he had been in any ‘punch ups’ with opposition players, Matt Henry confessed he had not, and the mild-mannered pace bowler did not even sledge the opposition.

Henry Nicholls said the old days of sledging were largely gone because there were microphones everywhere on the grounds. There was more comradery in the game because of competitions such as the Indian Premier League where internationals ended up on the same teams as their rivals.

Tom Latham, who will captain New Zealand in the Bangladesh series, was delighted to catch up with resident Jack Harliwich, a former Canterbury player and coach.

“I coached Tom’s dad Rod (Latham) and it was excellent to meet the players,’’ Jack Harliwich said.

Tom admitted his favourite pastime outside of playing was – watching cricket.

“Dad was a New Zealand cricketer and I grew up with cricket, so I guess the acorn did not fall from the old oak tree,’’ he said.

Resident Robin Wear looked resplendent in his 1952/1953 Canterbury School Boys representative cap, but the best dressed fan was taken by Lynn Gray, who had ‘borrowed’ a bat, pads and gloves for the day.

Big hitting Craig McMillan had his own gaggle of fans, including one former umpire who had given him out.

One resident took the time to thank Craig for his work as a role model for diabetics.

Craig told the audience how it had come as a shock to learn at the age of 15 he was a diabetic and his pancreas was failing.

Since then he has injected insulin four times a day.

“I guess I had to get organised really quickly as a 15-year-old. I lived for sport and I didn’t want it to slow me down.

“I never wanted it to be an excuse. But when I think back about some of my dismissals maybe my diabetes was the reason,’’ he joked.

“Shane was just a magician. His ability to turn the ball and the way he changed things up meant he never gave you much. He was a real competitor. Glenn was like Sir Richard Hadlee – just fast enough and so consistent – he was an awesome bowler.’’

All the players said nerves were a reality of life, but Frankie admitted to a few rituals to conquer them.

“I have some lucky undies and there are a few things that are always in my gear bag. I eat the same breakfast each day on match days, which means I get a bit sick of the same food on long tours.’’

The grilling was followed by a cup of tea and photos and everyone wished the players the best of luck.