Ryman’s Regional Construction Manager Matt Hutchinson and Project Manager Aurelian (Ricky) Ciobanu have been recognised for their commitment and passion for safety on site with a win at a national construction awards ceremony.
The Ryman duo won the Site Safety and CHASNZ Safety Excellence Award for their invention and development of a safe storage system for sheets of plasterboard, and were finalists in the James Hardie Innovation category as well.
Project Manager Andrew Inch, who is 29, also received a highly commended from the judges in the Young Achiever category of the 2021 New Zealand Institute of Building (NZIOB) NZ Building Industry Awards.

The achievements mark the first time Ryman has been recognised in the industry-wide awards.
Ryman Healthcare’s New Zealand Construction Manager Paul Blackler said the awards were ‘well deserved’ and everyone was ‘incredibly proud’ of them all.
“With over 700 people in attendance, it was fantastic to see Ryman represented by three great individuals and all three were recognized by the NZIOB,” he said.
The vertical panel storage device (VPSD) was invented by Matt in 2013 after learning about a workmate’s young nephew who died when plasterboard stacked against a wall fell on him while he was playing underneath it.
The conversation was fresh in Matt’s mind when he was looking at how board was arriving and being stored on Ryman’s Orewa site.
At the time a concrete panel truck was unloading on site and Matt looked at the way the trailers were designed to store the panels on an angled base.
It was then he had his lightbulb moment – why don’t we do the same for plasterboard?
After talking to his colleague, Ricky, they mocked up some prototypes out of scrap wood and, seeing how effective they were, put them into use straightaway.
With Ricky being a qualified mechanic as well as a builder, he set to work welding steel and aluminium versions in the search for the perfect design and has been refining the device in the years since. 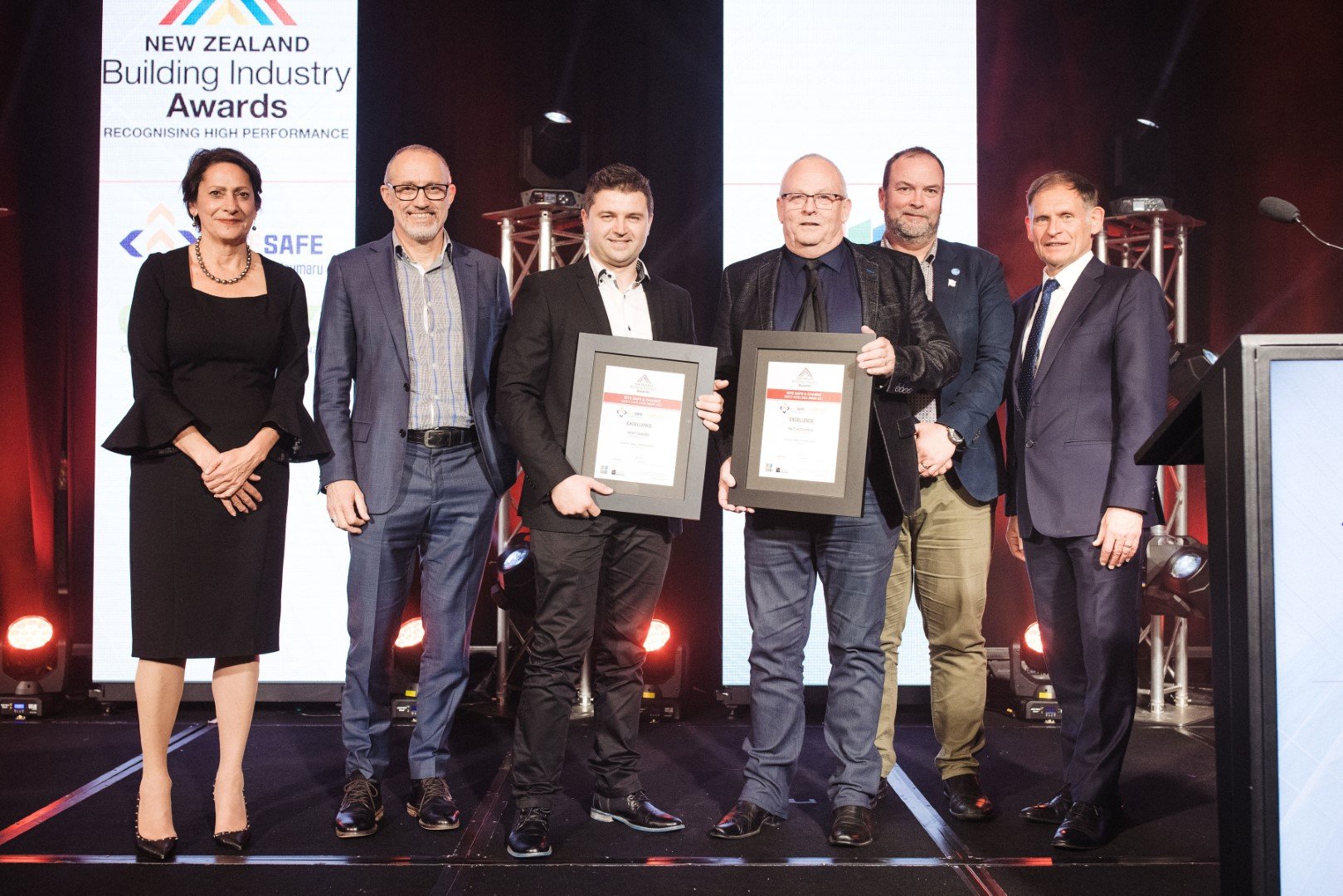 It was this commitment that stood out to the awards judges who cited Matt and Ricky’s ‘real passion’ for site safety as being of excellent standard.
The judges said they expected to see VPSD become commonplace on construction projects, as the industry realises the benefits to safety and efficiency on site.
Matt said that hearing their names called out on the night had left him ‘a little stunned’ at first.
“It’s the first time we have been involved in these awards and then for Ryman to be in three categories then win one and get a highly commended in another is a great achievement,” said Matt.
“Some of the projects we do at Ryman are as complex as many other jobs out there and that’s evident when you compare our sites and designs to the rest of the construction world, so to get some industry recognition and get our name out there is awesome.
“Ryman flies under the radar in the construction industry, so it is a real honour to be part of moving us into the spotlight a bit.” 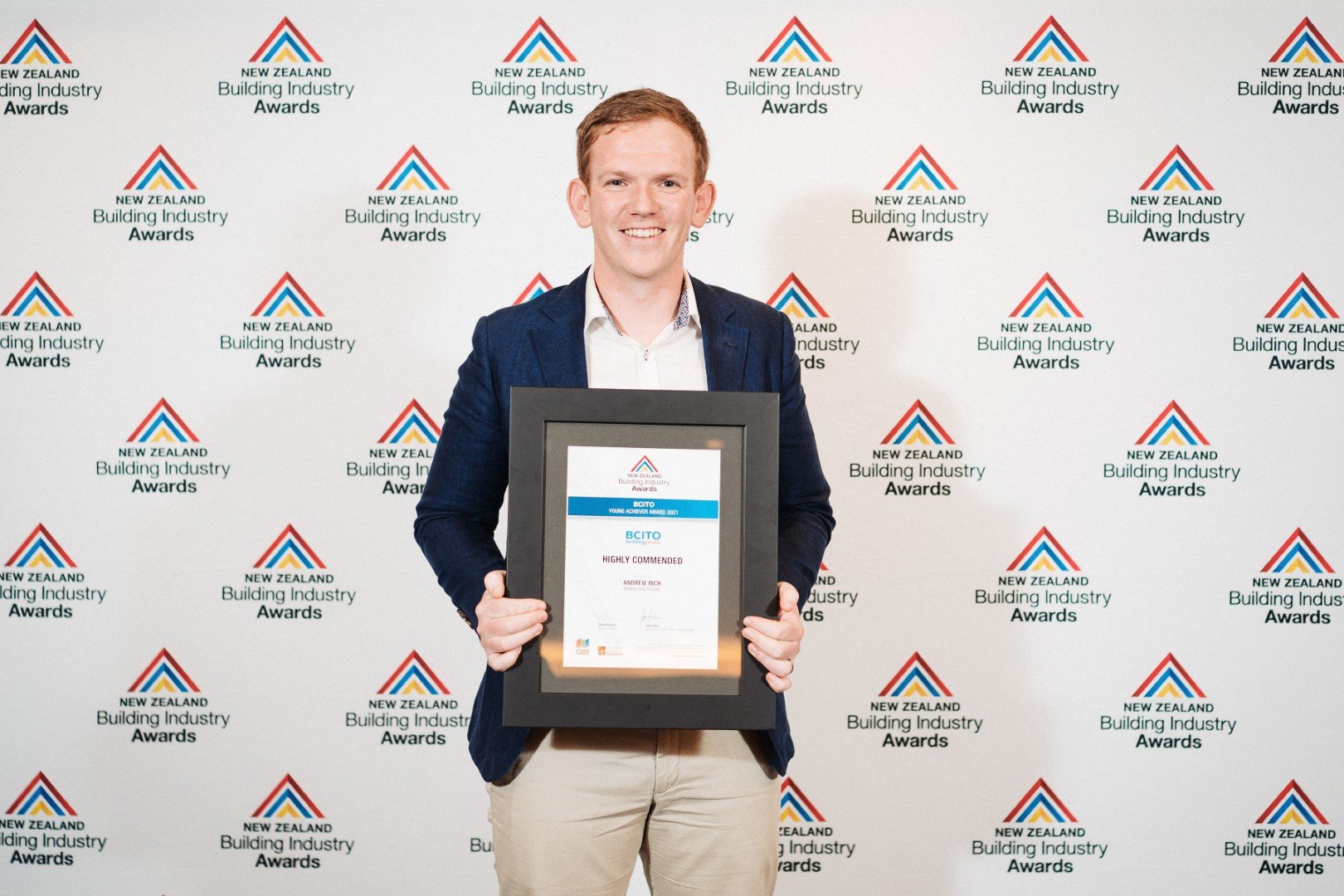 Andrew said it was ‘an honour and a privilege’ to even be nominated for the BCITO Young Achiever award and to receive a highly commended citation far exceeded his expectations.
“I feel very humbled to be recognised because I am just trying to do my job to the best of my abilities,” he said.
“Seeing not only my work but also Matt and Ricky’s work acknowledged makes me excited for what we at Ryman can achieve and be recognised for in years to come.”
NZIOB Chief Executive Malcolm Fleming said congratulations went to all winners.
“These awards showcase and celebrate the commitment of those working in construction to excellence, thereby contributing to the NZIOB’s goal of raising standards across the building industry.”