The Anzac service at Bruce McLaren in Howick last week, was a special day for the whole village and a topic close to the hearts of many.

The service was held on the 22nd of April so that the village could have a chance to celebrate together. 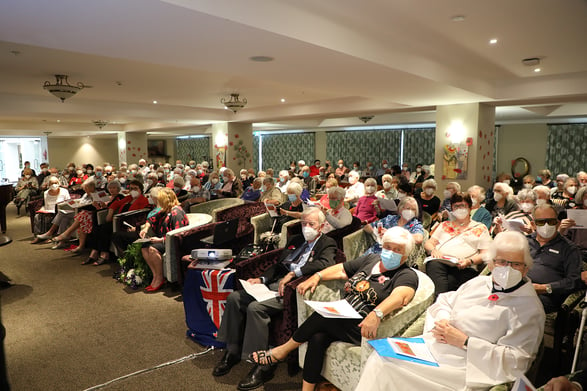 “It’s nice to have the service on a different day other than the official Anzac Day, said Bruce McLaren Village Manager Chantelle Hand.

“More people can come, and we can enjoy it together as a village. Then everyone breaks into their smaller family groups to celebrate in their own way on the day.”

This year’s service was specially put together by Beverly Johnson, who collated the stories of Air Transport Auxiliary (ATA) pilots June Howden and Jane Winstone, and the Pacific War of 1942. Residents Celia Martin and Paulene Murdoch narrated the stories of June and Jane.

June, from north Waikato and Jane, from Whanganui, were two of only five female pilots who joined the WW2 effort in England to transport planes and medical supplies, leaving in 1943.

Once enlisted Jane was assigned to the Ferry Service and flew Hurricanes and Spitfires to deliver them to pilots on bases.

Jane Winstone died in service on 10 February 1944 while flying for the Air Transport Auxiliary when her Spitfires’ Merlin engine failed. Ryman’s Whanganui retirement village is named in honour of her.

June returned home after the war, flying as a commercial pilot for Waikato Aero Club and raising a family. 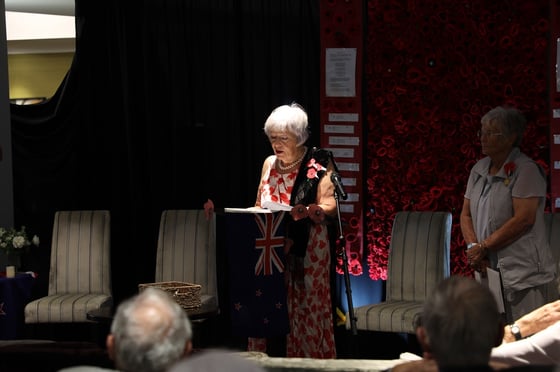 Continuing the service, Beverly also researched and wrote a section on the Pacific part of the war in 1942 focusing on the Japanese Campaigns to increase Asian prosperity. 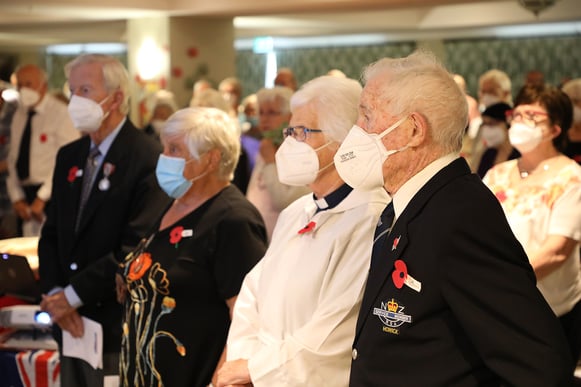 Beverly talked about the focus of the Japanese campaigns in the Pacific and Asia.

Elizabeth talked about the impact on the lives of Kiwis, who not only sent personnel overseas but also braced for its own invasion, arming the hillsides with artillery and practising invasion drills in schools.

Bernard talked about James Easton, a 105-year-old resident from Auckland’s Grace Joel village. He joined the Australian army, aged 23, and was sent to Singapore to fight the Japanese. Becoming a prisoner of war in Singapore after holding the Japanese off for three months, he was sent with thousands of others to build a railway bridge in Burma, a four-day truck journey away. Working 16-hour days with constant beatings, James was relieved when the war was over. Weighing only 47kg on arrival back in Australia, he stayed in a prisoner of war centre to ease him into civilian life again.

All in all, it was a lovely service, attended by many residents from Bruce McLaren. A wreath was also laid by Village Manager Chantelle Hand and Val Biddick, in remembrance of those who lost their lives in World War 2.

With over 43 people getting vaccinated per hour, Bruce McLaren residents and staff were rolling up their sleeves in drov...