The two lovely ladies, Lorraine Quinn and Avrille Field (who has the toy leprechaun mounted on the side of her walker), soon realised they were childhood friends.

Lorraine and Avrille took a little while to realise they had known each other more than 70 years earlier.

It was a discussion about the leprechaun and the part music had played in their lives that made them twig, that each had been to their respective 6th birthday parties.

Lorraine also remembers Avrille’s father, Clarence B Hall, both because of his distinctive name and because of his musicianship. He was well known in Christchurch for playing for theatrical productions and events. One of the family’s rooms she looked into during the 6th birthday visit, had a large organ in one corner, she remembers.

There was also a grand piano in the room, Avrille adds.

The pair’s paths crossed only briefly when they were six years old. Lorraine says her family only stayed in that area of Christchurch for a relatively short time. 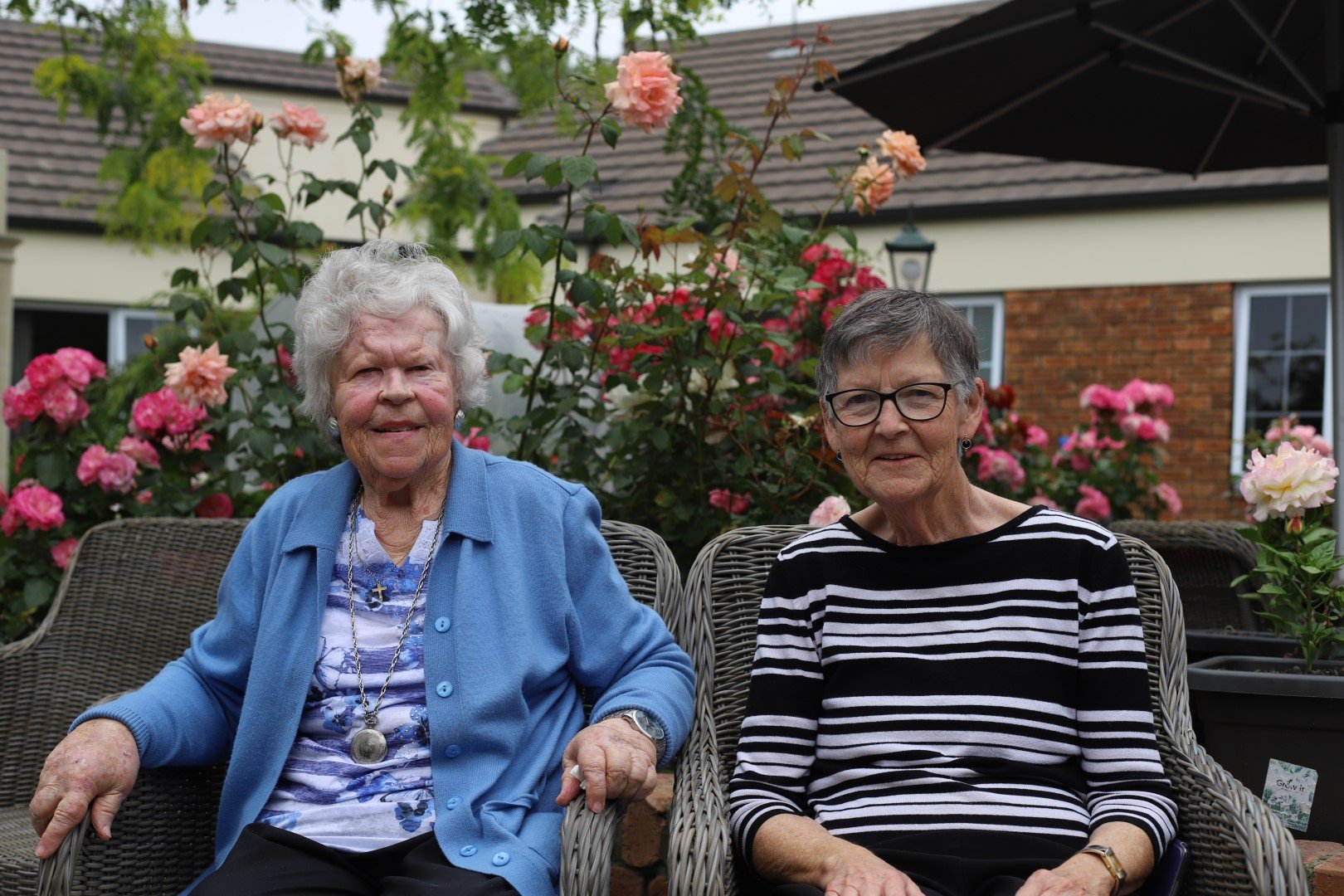 In 2021, the two are quite relaxed, sitting and talking in the beautiful gardens of Margaret Stoddart village on an early summer day. Avrille says she arrived relatively recently at the village, having lived for 35 years in her last home in Leithfield, south of Amberley. There she loved tending to her plants including the 500 roses she put on the section. Her sister and daughter helped her pick Margaret Stoddart as a new residence. She also has a son living in Auckland, and three great-grandsons in Kerikeri.

She moved into the village because she was unsteady on her feet and having too many falls around her home. The meeting between her and Lorraine at the village location could be described as happenstance.

Lorraine has become attached to village life at Margaret Stoddart. She moved from Bishopspark village, located near Hagley Park, and is now a big fan of Ryman Healthcare and the boutique village. Becoming friends (again) with Avrille was another bonus.

“Avrille was coming out of her room with her walker, and I saw that little thing (leprechaun) and being involved with music I saw the accordion. So I said did you used to play the accordion, and she no but my father was a well-known Christchurch organist,” she says.

“I said what was his name. And she said Clarence B Hall… I said Avrille I was at your sixth birthday party and you were at mine. But then before I was seven, I’d moved to Shirley. I hadn’t seen Avrille since.”

Somewhere in her collection of memorabilia Lorraine says she has photos of both Avrille’s birthday at her family’s “beautiful” 182 Colombo Street and their Sommerfield school class.

Both Avrille and Lorraine talk of the enjoyment of living in a boutique village with doors from their apartments leading out into garden areas, blooming with spring growth and flowers. “I love it here,” Lorraine says.

Avrille adds that since she moved in three months ago, she’s enjoyed getting to know residents and the village team members.

Both Avrille and Lorraine say they enjoy the security of the village. They note they have medic alert necklaces, with a button they can push if they have a fall or some other health worry or event.