Charles Upham residents were delighted and wowed by a new portrait of their village namesake.

The late autumn setting at the village helped set a warm tone for the unveiling of the portrait of Charles Upham by Craig Primrose QSM. The colours were bold but reflective and caught the attention of residents as the painting was unveiled at a special Happy Hour.

Corporate Affairs Manager David King said Captain Charles Upham and his name fitted in with the Ryman Healthcare tradition of identifying our villages after significant local people in the areas they are built. It was our cofounder Kevin Hickman’s idea.

“He thought a person would resonate more than a geographical location. Ryman Rangiora doesn’t sound quite as good as Charles Upham!” David said.

Charles Upham’s grandson David Mackenzie was on hand to represent the Upham family.

Charles Hazlitt Upham was born at Gloucester Street in Christchurch in 1908, the residents heard. 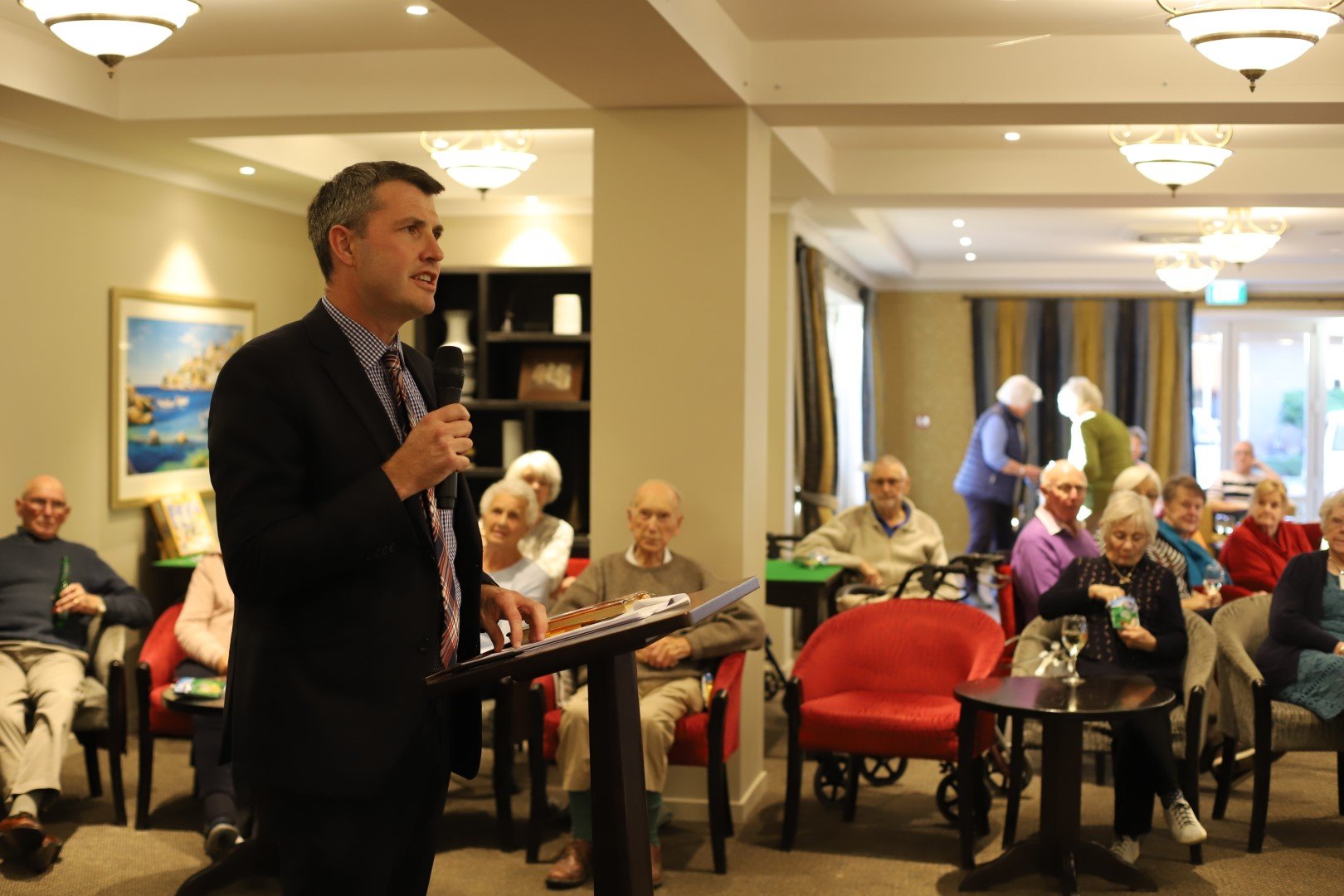 It was at boarding school, at Christ’s College, that the first signs of what made him tick emerged – he had a great sense of justice and would defend anyone being bullied by older kids.

His farming background, his toughness, and his shrewd eye for land set him up for what lay ahead.

He had served as a territorial soldier during the 1930s and when war broke out in 1939 he was 30, and he signed up for the2nd NZEF and joined the 20th Battalion.

He joined as a Private but Colonel Howard Kippenberger recognised his potential and promoted him. His men loved him and he was brilliant – he assessed risk, was tactically smart and fearless when it came to getting the job done.

Charles Upham went to war in 1940, and was soon in action in Crete.

Crete was a disaster for the New Zealanders, but it was here that Charles Upham shone over 8 days in May 1941. This included leading attacks on machine gun posts on numerous occasions, carrying a wounded man under fire, and fighting on after taking shrapnel wound to the shoulder and a bullet in his foot.

The London Gazette reported: He showed superb coolness, great skill and dash and complete disregard of danger. His conduct and leadership inspired his whole platoon to fight magnificently throughout, and in fact was an inspiration to the Battalion.

For all of this he earned his first Victoria Cross, which he was awarded while the 20th battalion was regrouping in Egypt.

He soon recovered from his injuries and was sent into action in the Western Desert at the Battle of Ruweisat Ridge.

During fierce fighting and despite being wounded twice, Charles Upham crossed open ground to completely destroy a truck full of enemy soldiers with hand grenades.

After the war he was liberated and received his Victoria Cross in London from the King George VI.

The King was then approached to award a second Victoria Cross for his exploits at Ruweisat Ridge in the Western desert.

The bar, or second VC, catapaulted him to even more fame, and made him the most decorated Commonwealth Soldier of the Second World War.

He remains the only combat soldier to receive two of the highest awards for valour ever awarded in the Commonwealth.

And so, by 1946 his legend was cemented in New Zealand’s history.

He settled down with his wife Molly on a sheep farm at Conway Flat.

Daughters Amanda, Virginia and Caroline soon arrived, and a settled life began for the family.

All of this made him, without a doubt, the finest soldier this country has ever produced.

Village Manager David Cartwright introduced the unveiling and welcomed a huge crowd into the village centre. Craig took questions from the floor, and said he didn’t often get things too wrong in terms of his painted works.

David Mackenzie said he was proud to be back at the village, having also been at the 2016 opening.