The team at Edmund Hillary loves to care

There’s a board on the wall in the reception of Edmund Hillary Retirement Village covered in colourful post-it notes with messages from residents thanking the team for their care and efforts in managing the Omicron outbreak.
Common phrases stand out; that they are all ‘superheroes’, who create a ‘friendly, hospitable atmosphere’, with a ‘positive vibe’, which makes Edmund Hillary, or ‘Club Ed’ as the residents affectionately call it, a fantastic place to live.
Village Manager Dean Jackson says the whole team works hard to create a happy environment for the residents.

“Our residents are incredibly grateful for the care received. It’s been two years of turmoil but we’re finally starting to come back to normal and reopening and experiencing village life again,” he says.
While working in a retirement village during a global pandemic has not been without its challenges, and would certainly prove too challenging for some, Dean says it has brought the already tightknit team even closer together.
“Everyone has had to adapt and pull together to cover roles to ensure the residents were safe and well cared for, and it has been a real bonding experience.”
Dean says he is often asked how long he has been the manager and when he replies that he will soon be celebrating a decade in the role and most of the management team have more than five years each under their belt, the response is usually the same.
“People find that reassuring, that we have that experience, and of course that with so many of us working here for so long it’s clear we obviously love what we do!”
Indeed, as well as Dean with his 10 years, there are two staff members who are celebrating their 20 year anniversary this year – Village Coordinator Michelle Forman, who started out at Ryman’s sister village Grace Joel, and van driver Brooke Roberts.
Then there are five staff who’ve notched up 15 years plus, 29 at 10 years plus and 72 at five years plus, such as Sales Advisor Becky Gillanders with fellow Sales Advisor Colin Caldwell keen to catch up!
Even Regional Operations Manager Lynn Charlton, who oversees Edmund Hillary village, has an impressive 11 years with the company. 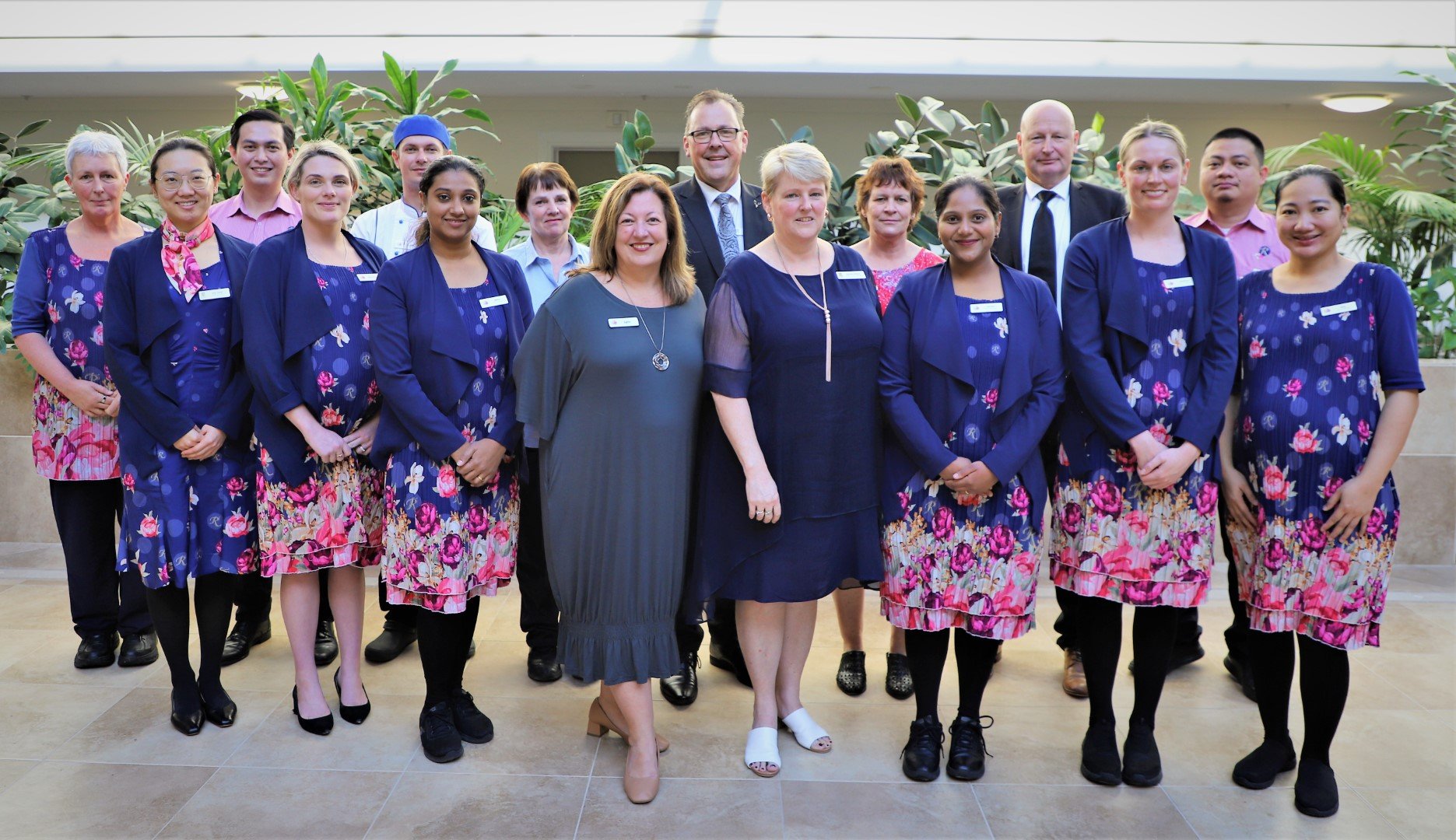 The loyal team of Edmund Hillary.

That’s a lot of loyalty and love of Ryman right there, and proof that the company prioritises care of its staff as much as its residents.
The care team leaders, while newer to the village, have considerable experience gained from many years in nursing and specifically the aged care sector and are attracted by ‘the Ryman difference’ - an environment that encourages kindness and empathy, as well as the beautiful surroundings they work in.
Many team members are chosen for the rapport they have with older people while they in turn find Ryman’s philosophy of providing care that must be ‘good enough for Mum or Dad’ resonates on a daily basis.
In the words of Serviced Apartment Unit Coordinator Siobhan O’Connor: “The quality of care that Ryman delivers to residents is truly of the highest standard and the support that staff receive is equally exceptional.”
It’s no surprise that the village, which celebrates its 15th birthday this year, regularly places as a winner or finalist in Ryman Healthcare’s in-house awards.
Another great asset has been Senior Lead Chef André Kassal’s appointment, who received a standing ovation from residents after his first fine dining night.
The charismatic chef, who worked in five star Kempinski hotels and restaurants in Switzerland before moving to New Zealand, has loved getting to know residents at the regular ‘Chef’s Table’ sessions.
And Village Manager Dean says the proof is in the pudding, so to speak!
“We’re getting great feedback about the food. It’s a pretty happy environment all round.”

All are welcome to have a look around the village and meet the team – just call 09 570 0070. For care enquiries ask for Dean Jackson and for sales ask for Becky Gillanders or Colin Caldwell.