An idea to bridge the divide between generations with the simple act of putting pen to paper culminated in a very special delivery at William Sanders Retirement Village this week.
Residents were left stunned and delighted when a group of Year 6 students representing Stanley Bay Primary School delivered letters addressed personally to each resident in the care centre and serviced apartment areas of the village.
Belle Newman, Katie Conroy and Lily Ostergaard, all aged 10, took time out of the school holidays to visit Ryman Healthcare’s Devonport village along with teacher Ethan Rasmussen and Katie’s mum Sandra.

The girls handed out the letters and three beautiful artworks that they and their classmates had lovingly prepared during the term.
“That’s brilliant!” hospital resident Maurie Richards exclaimed after receiving his letter which was written by 10-year-old Olive Henderson. “Thank you very much.”
Rick Ballinger was also thrilled at the surprise gesture. Accompanied by wife Rose, Rick formally thanked the girls and all the children from Stanley Bay School for the lovely thought.
Belle gave resident Eileen Mortimer her letter while Eileen’s husband John pointed out to the girls all the landmarks they could see from their window, including Takarunga Mt Victoria.

Eileen Mortimer (right) with husband John (left) receives her letter from Katie, Lily and Belle, who is shown holding one of the three artworks made with contributions from the whole school. 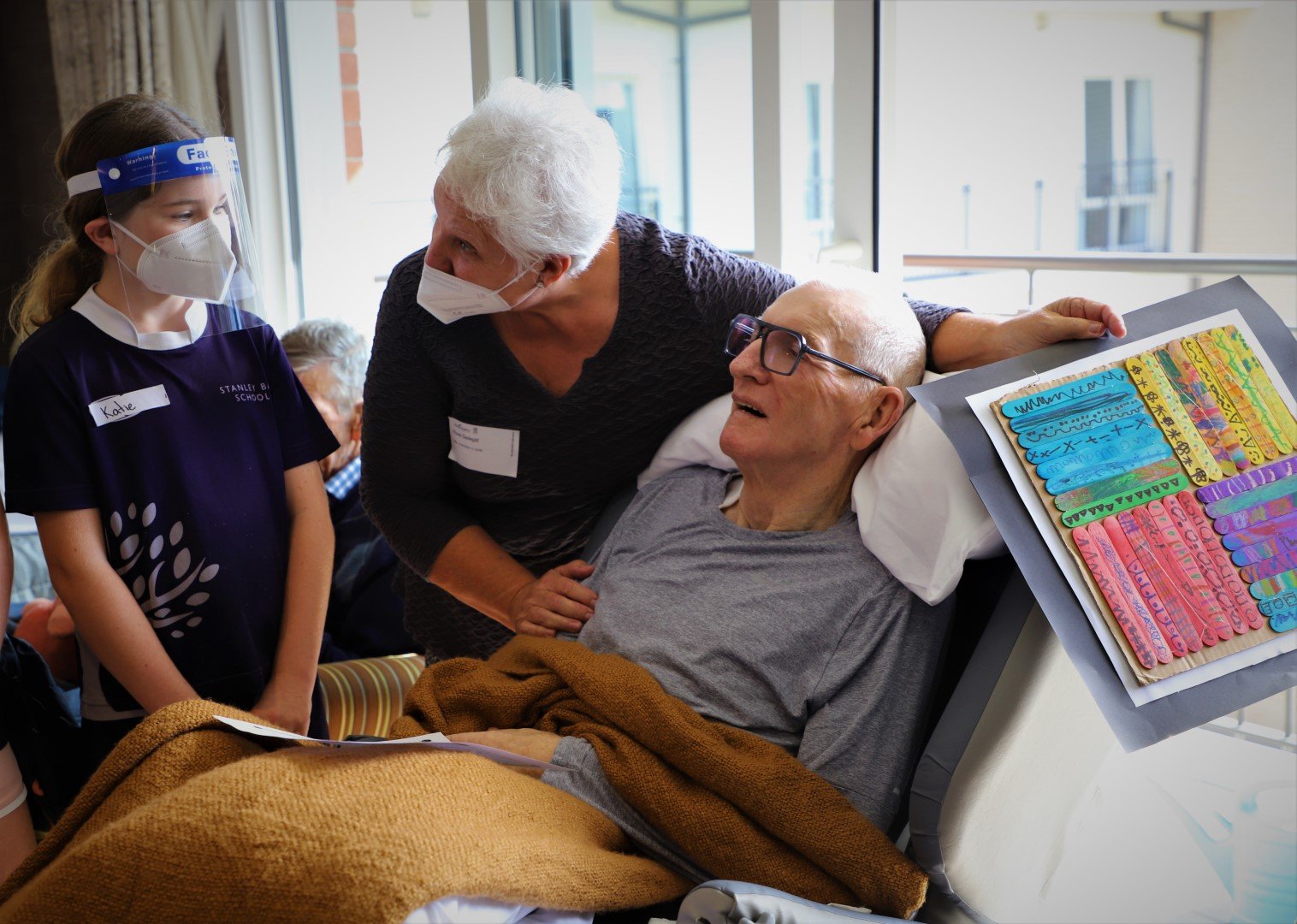 Resident Rick Ballinger thanks Katie for the letter while wife Rose asks about the artwork.

A resident in the resthome, Pat Bjorklund, read out her letter from 10-year-old Lennox, who, like her, had arrived in New Zealand from another country at a similar age.
Lennox, who used to live in America, asked Pat questions such as how she used to get to school, and how she learned her times tables, finishing with: “I look forward to hearing back from you…and hope to visit you at some point this year.”
Pat recalled her childhood in Yorkshire, England and travelling to school on the tram and moving out to New Zealand when she was Lennox’s age.
Teacher Ethan marvelled with Pat at how she and Lennox already had something in common with each other despite the difference in ages.
“You both moved to New Zealand from a different country which is a common touchpoint you both have and the fact that you took a tram to school, he will love to hear all about that,” Ethan said.
“We think being able to have conversations with our elders is a great way to build the children’s confidence and maturity,” he added.
“We hope this is the start of a tuakana teina partnership, which directly translates as ‘older teaching the younger’, throughout 2022 and potentially beyond.” 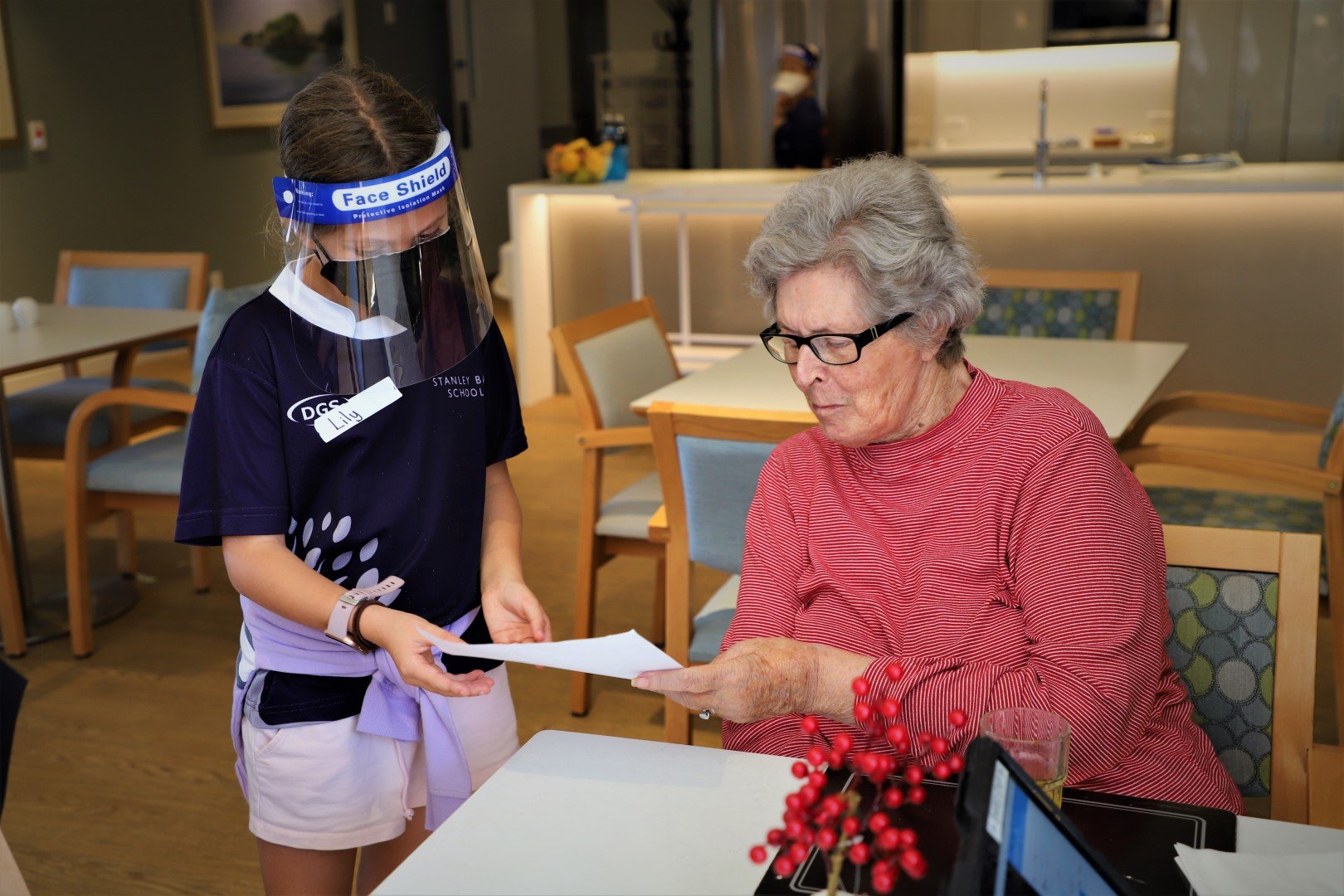 Anita Burgess with Lily (above) and Gwen Matthews and Katie (below). 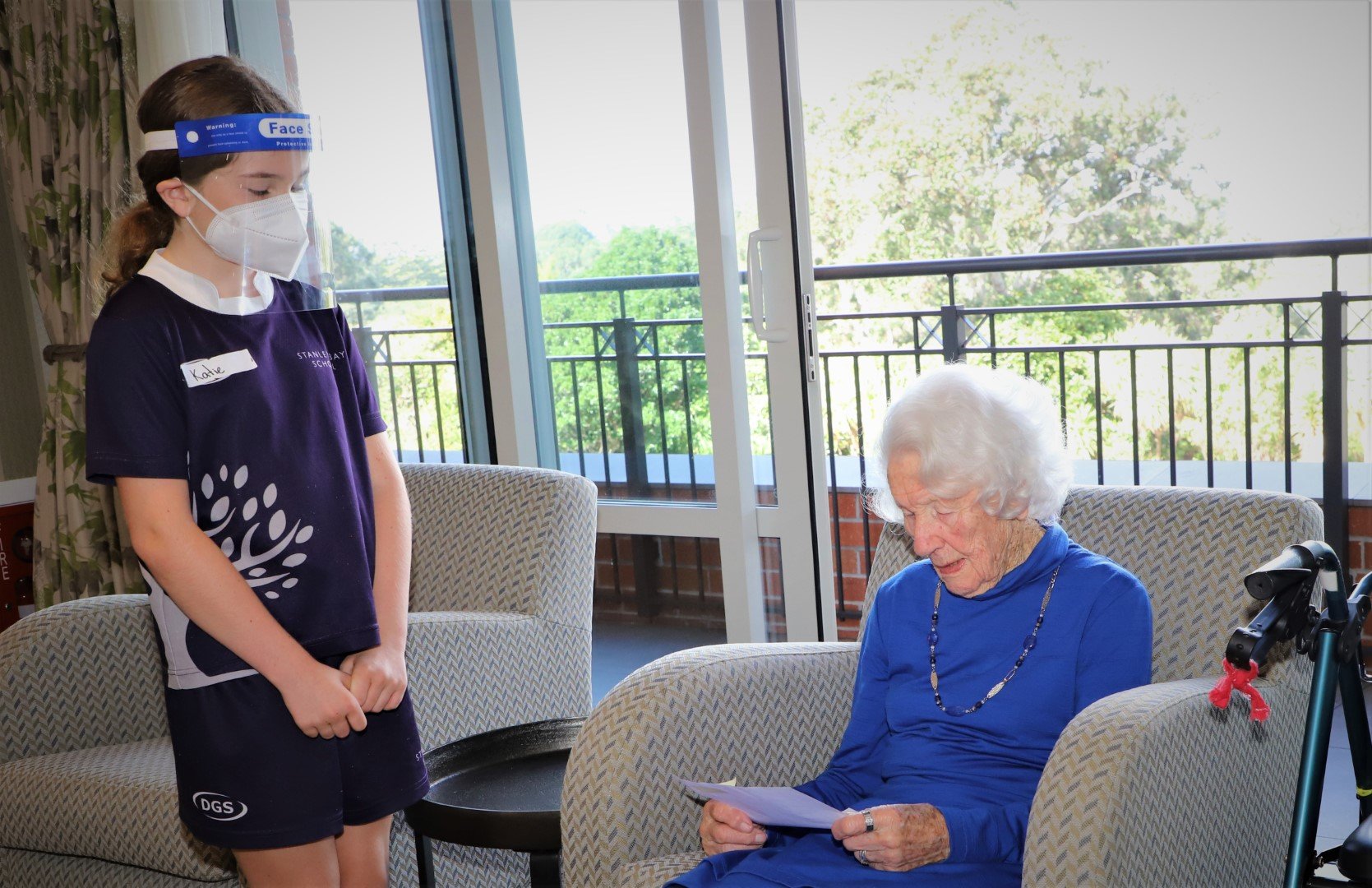 Fellow resthome resident Anita Burgess, who received her letter directly from Lily, was overwhelmed at the thoughtful gesture.
“Thank you so much, you’re wonderful people!” she said to the girls, who had donned face masks and visors and were some of the first under 12s to be able to visit the care centre since Covid restrictions had finally been relaxed.
Katie delivered the letter she wrote directly to Gwen Matthews, who is 98.
“I am very curious who you are and your family history. I am really excited to meet you,” Katie wrote in her letter.
“I play basketball, rippa and netball. I am a house leader so I have the privilege to run things like sausage sizzles.”
Gwen approved of Katie’s physical activities, crediting good exercise for keeping her fit and enabling her recovery from four hip operations.
“I’m so thankful to be here and still going!” she said, telling Katie that she had also served in the Auxiliary Territorial Service (ATS) during WW2. 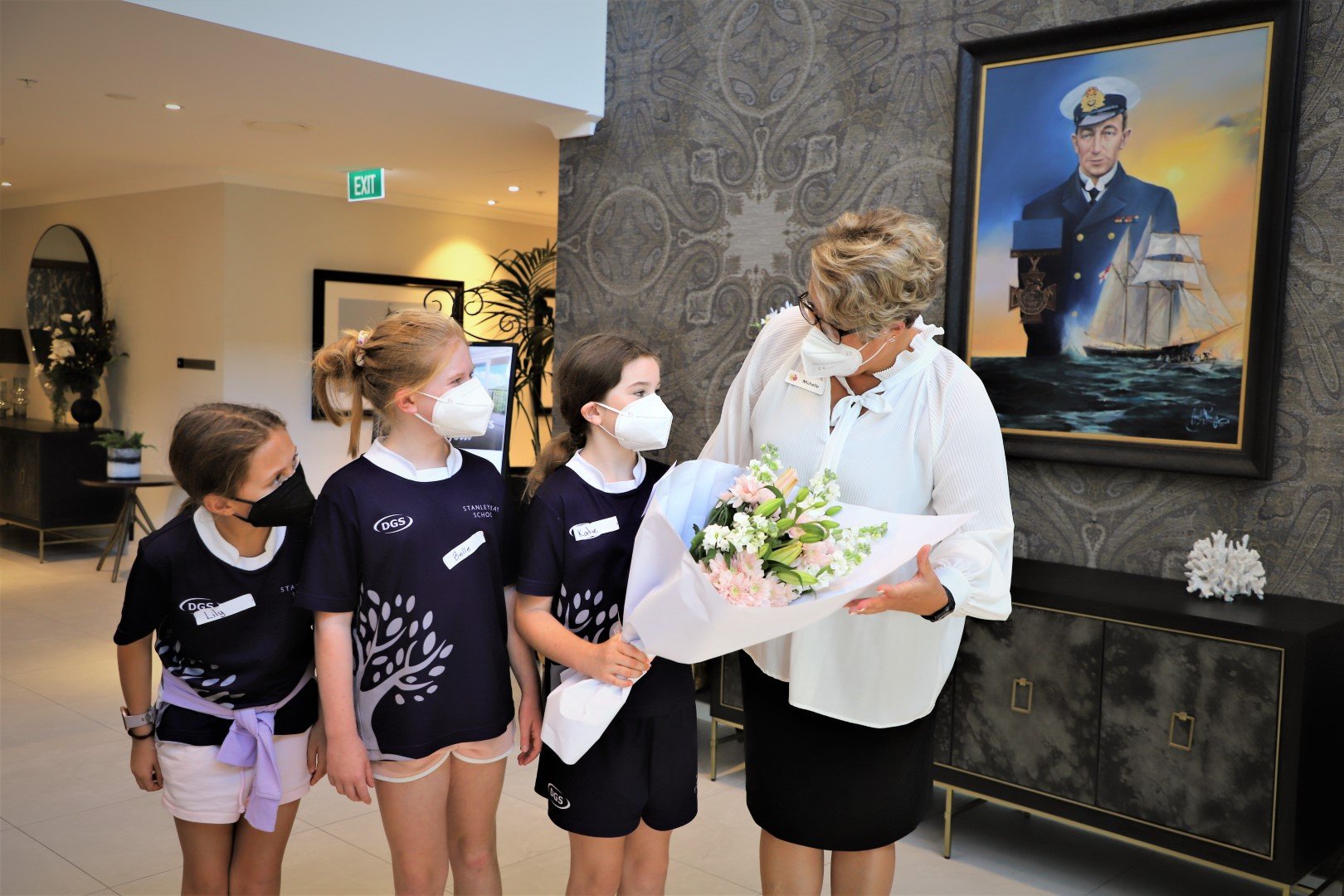 Michelle receives a bouquet of flowers from the Stanley Bay School students.

William Sanders Acting Village Manager Michelle Barnard said the visit had been very special and the feeling of excitement had continued the next day.
“It was very well received and has certainly lifted everyone’s spirits after the doom and gloom of Covid.
“I had residents ask me ‘are the children coming in again?’ and another said it was a breath of fresh air.
“The staff and residents all thought it was a lovely thing to do and they’re all planning to write back.”
Michelle said the three artworks would be displayed in each of the hospital, resthome and special care wings.

Ryman Stories of Service - we say thank you

The eighth edition of Ryman Healthcare's Stories of Service tribute book is now published and is at the villages, librar...