Ross and Graeme join forces for the cycle final

Ross was very pleased with his sixth place but said the hill sections were tough to pedal.

“I aimed to be in the top-10, but I didn’t tell anybody. I can tell them that now.” His wife Margaret, who competed in the women’s event, was keen to congratulate Ross.

Ross says it is the social side of cycling that is perhaps the most important. Both he and Margaret have e-bikes, which they take out each week.

He also takes the lead with a U3A (University of the Third Age) cycling group that regularly pushes out into Christchurch and beyond. They might, for example, end up in a café in Brighton, Sumner or Kaiapoi before the return leg of the journey.

There are other benefits, aside from regular coffees. His social circle has spread. “People talk to me now, that never talked to me before. That sort of thing, I think, is very good socially.” 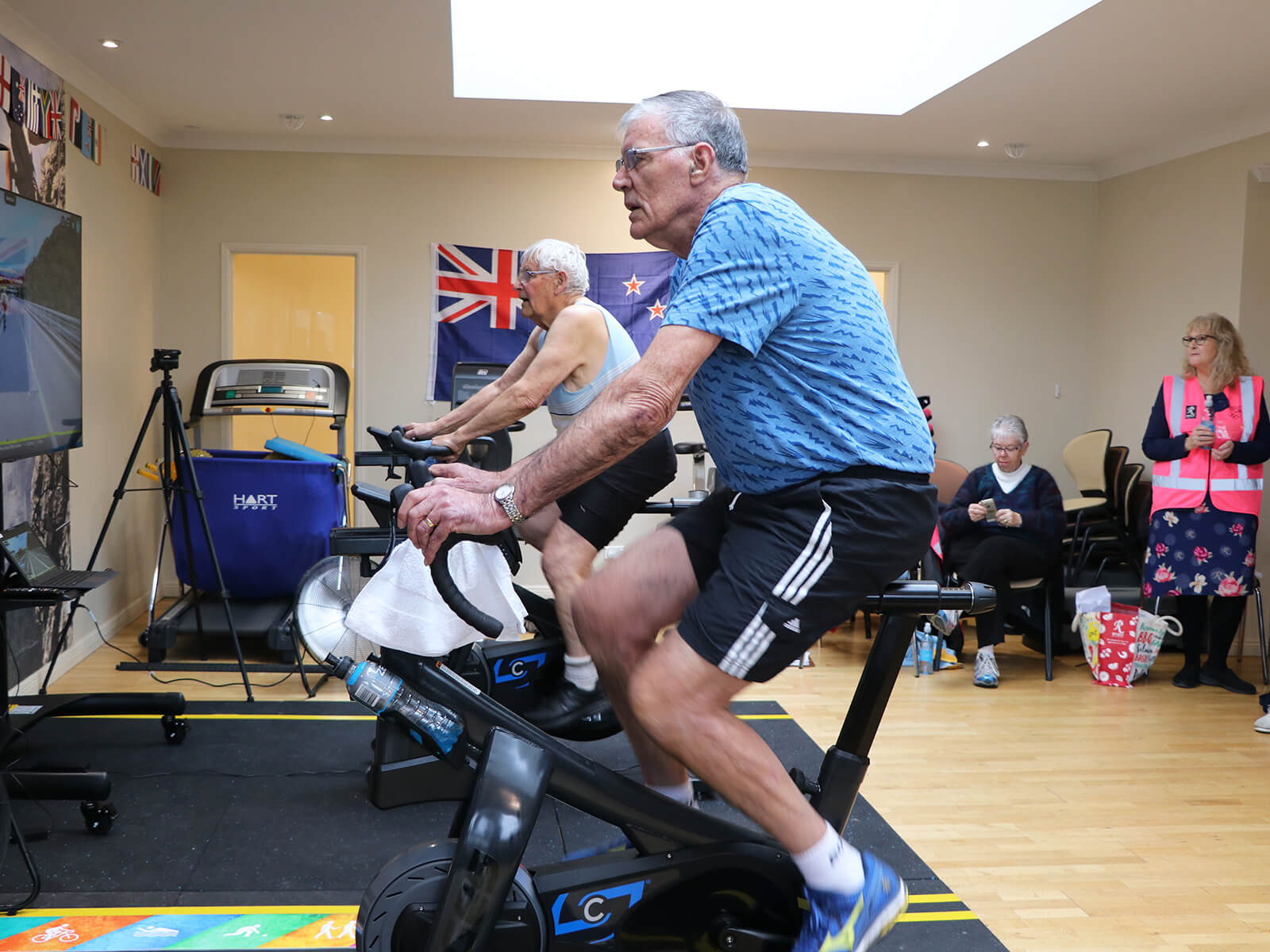 Ross (foreground) and Graeme (background) halfway through the race.

Speaking of social, Ross was joined for the cycle final by Graeme Matthews from Hilda Ross village in Hamilton.

The two pedaled side by side with individual screens in front of them showing the course and the other cyclists they were competing with.

Graeme and his wife Maureen were on holiday in the South Island at the same time as the cycle final and adjusted their trip to fit in a visit to the Diana Isaac gym for the event.

“I’ve found that it’s a great challenge. I didn't think I’d ever go to any Olympics but here I am!” says Graeme, who will turn 79 in September, and has had his knee operated on five times.

His competitive spirit and enjoyment of a challenge was the reason he decided to participate in the cycle race.

“All my life there have been challenges. I rise to challenges most of the time.”

A registered electrician by trade, Graeme still climbs trees to trim them, and he cycles and owns three electric bikes which he likes to tinker with. Wife Maureen prefers the water and likes to swim in the Hilda Ross swimming pool while Graeme goes on the treadmill.

Graeme has enjoyed the increased activity that Olympics@Ryman has created for people, stimulating them to keep moving when they find something they like to do.

“We all need stimulation,” he says, referring to the importance of continuing to move and exercise.

The Diana Isaac Retirement Village team were ecstatic winners within the Aged Advisor People’s Choice Awards, with the g...