The first bunches of bananas to be grown using food scraps collected from Evelyn Page Retirement Village are ripening now - and will soon be ready for tasting.
The team at Ryman Healthcare’s Orewa village this week celebrated the milestone of diverting over 50 tonnes of food scraps from landfill since they joined a pioneering local composting scheme three years ago.
They marked the occasion with Betsy and David Kettle from City to Farm who delivered a bunch of bananas grown using the compost made from the food scraps.

By using the lifecycle analysis calculation provided by WasteMINZ (Waste Minimisation Institute New Zealand), that 1kg of food diverted from landfill equates to 2.66kg of CO2 equivalent avoided, Betsy calculated that the village had now diverted 138 tonnes of greenhouse gases from the environment!
“It’s quite a significant milestone and with the village being our biggest contributor they have played an essential role in the study. We could not have done it without Evelyn Page, we’re very grateful,” she said.
It was village resident Graeme Howard who first suggested the idea that Evelyn Page join the City to Farm Composting Pilot after reading about it in the local paper back in 2019.
“I thought all this stuff is going to waste, why not do something with it?” Graeme said.
Village Manager Jill Clark agreed, as did Clem von Ellerts-Martinoli, the village Chef at the time, who encouraged the whole team to get on board with correctly collecting food scraps which current Chef Nick Lamb has since continued. 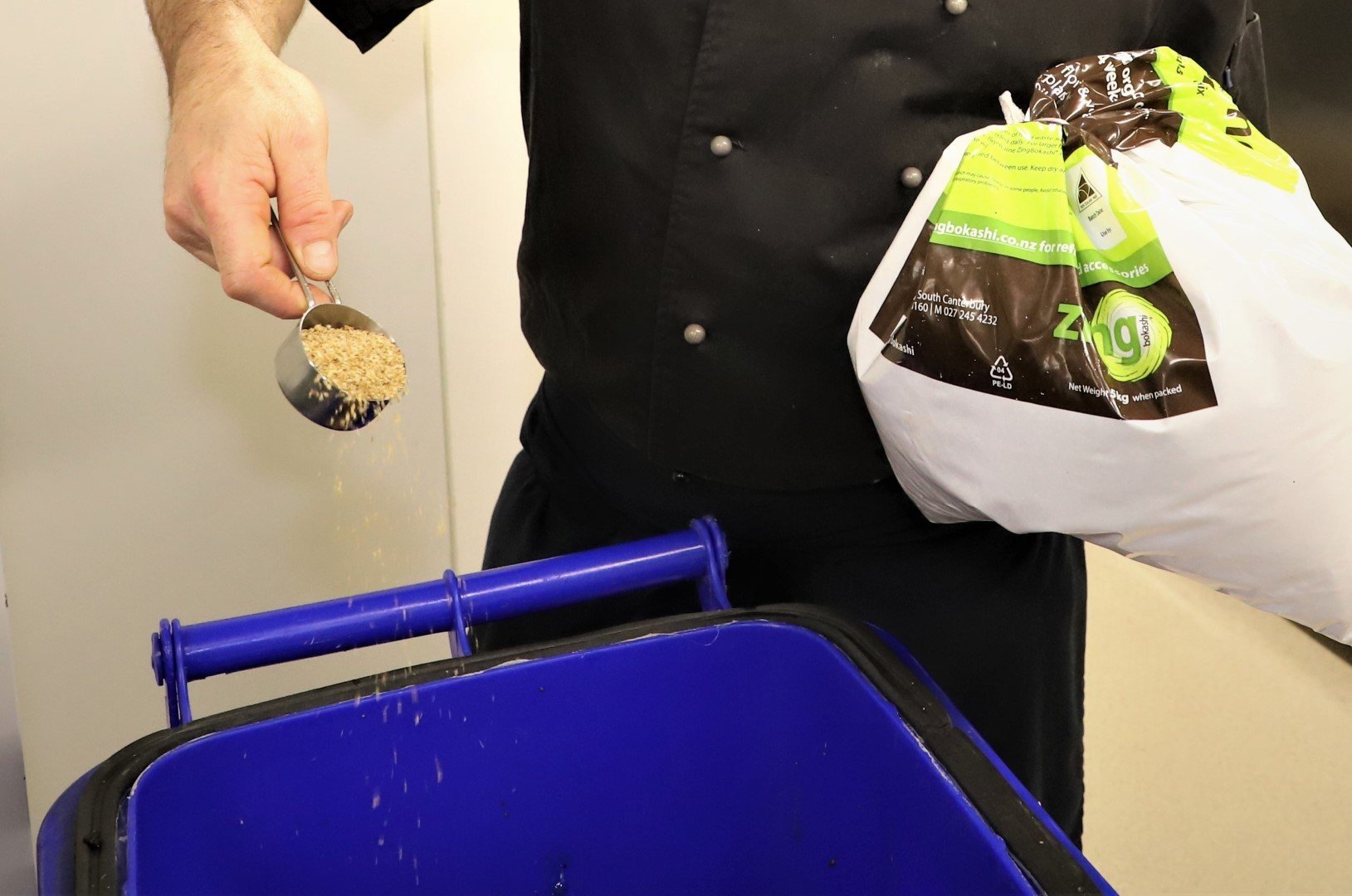 Adding the bokashi zing to the food scraps.

It’s an easy process - the caregivers and kitchen staff are shown how to collect the food scraps with the right consistency – not too much liquid - whilst layering in scoops of a bokashi zing, a mix of micro-organisms which ferment and breakdown the waste into an odourless matter.
Crucially, the fermenting process is anaerobic and therefore doesn’t create methane, unlike organic matter in landfills, and also means the breakdown is faster when it is eventually exposed to air.
The City to Farm team collect around seven 80 litre bins from Evelyn Page each week and deliver them to Phil Grainger, a farmer who has converted his land into a series of swales, or undulations, with the food matter deposited into the troughs for further composting.
Worms continue the breakdown over a few weeks and the rainwater washes the nutrients into the swales, significantly boosting the growth of the banana palms whilst regenerating the clay-like ground into beautiful, nutrient-rich soil.
“Growing bananas locally rather than importing them with their associated food miles avoids greenhouse gas emissions, and growing them organically rather than using energy and fossil-fuel intensive chemical fertilizer is another way to avoid those emissions,” Betsy said. 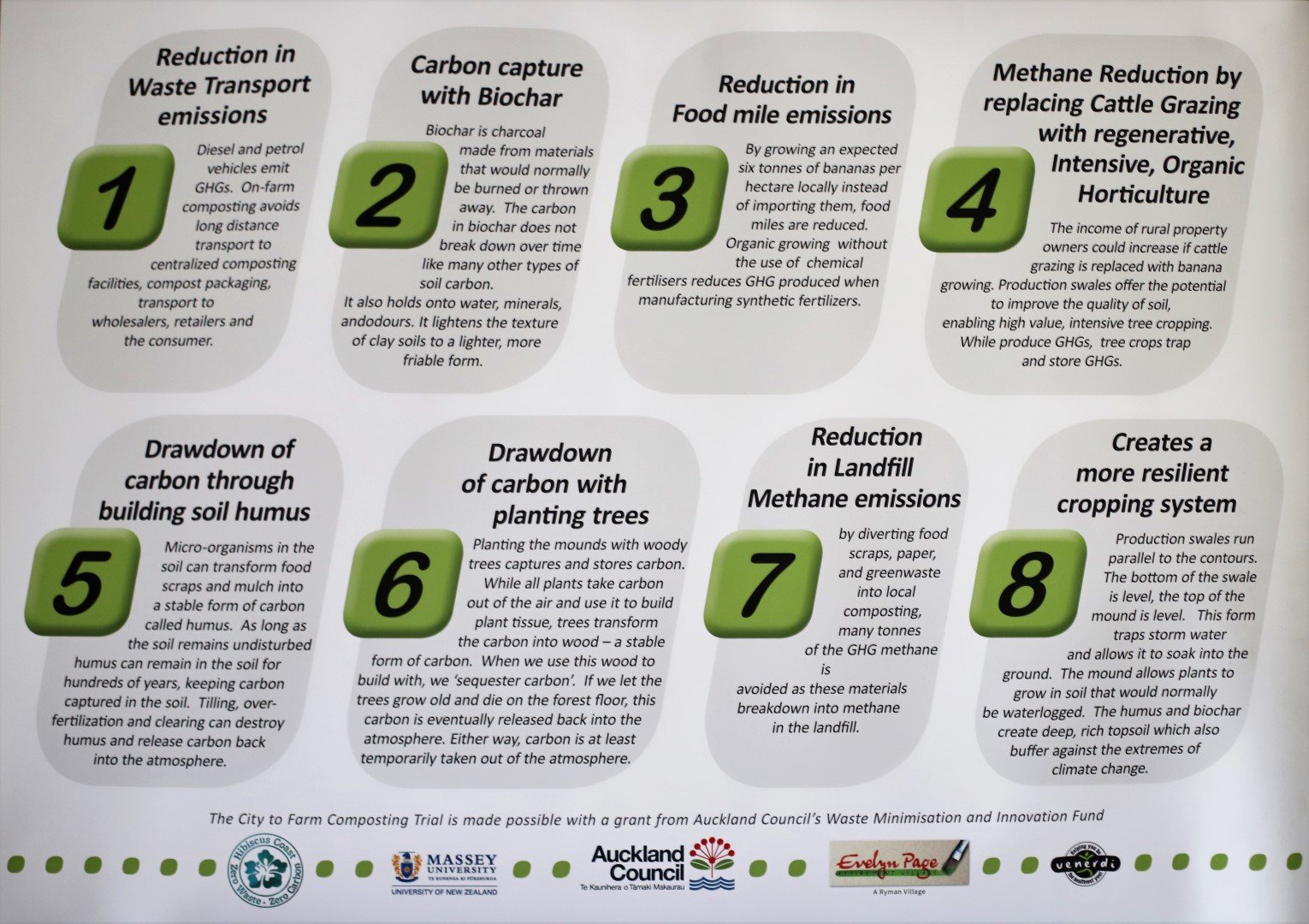 Eight great reasons to get on board!

Phil said: “Previously, this land could barely feed cows and now we’ve got about 250m of swale so we really need more scraps.”
In the three years since the scheme began, Betsy said around 15 commercial organisations had signed up, ranging from schools and kindergartens to restaurants, cafés, and a fruit and vegetable market.
Betsy, along with the rest of the team at Evelyn Page, urged other businesses to get involved, flagging a government proposal which may soon require them to separate food waste from general waste by law.
While separating food scraps is more expensive than not doing so, it was about ‘doing the right thing’, said Betsy, who, along with husband David, is managing the scheme under the umbrella of Hibiscus Coast Zero Waste, with research assistance from Massey University Palmerston North and a grant from Auckland Council.
“It is great that Evelyn Page is ahead of the game and helping to develop low carbon options to deal with business food scraps.
“We’re appealing to businesses to get in sooner rather than later and help a local project that’s doing all this research and testing that might make an impact on climate change.”
Ryman Healthcare was focusing on ideas for its other villages around the country to dispose of food scraps, said Sustainability Manager Michael Stanton, who was impressed with the contribution Evelyn Page had made to such an important study.
“It’s the start of a very fruitful journey that aligns with our overall ambitions of sustainability at Ryman Healthcare,” he said.