Residents get a taste of wines to come

Ryman residents recently took part in a series of virtual wine tastings to celebrate the launch of a brand new wine and beverage list being made available in Ryman villages nationwide.
While the wine was anything but virtual, most of the residents were Zooming into the presentation from their respective villages around the country while a lucky few got to enjoy an in-person tour and presentation at Villa Maria Winery in Auckland.

The special launch, which was staggered over three days, was a way to celebrate Ryman’s partnership with new supplier Gilmours which now gives residents access to a broader selection of wines and other beverages.
Regional Manager Rachel Garrard said that the ranges of Villa Maria, Pernod and McGuigans are being rolled out at the villages from 1st April.
“This will provide a great choice of New Zealand and Australian wines which is something that really resonates with our residents,” she said.
“And it means we can offer events like these virtual wine tastings and other promotions such as events at Villa Maria, so there are some great opportunities there.” 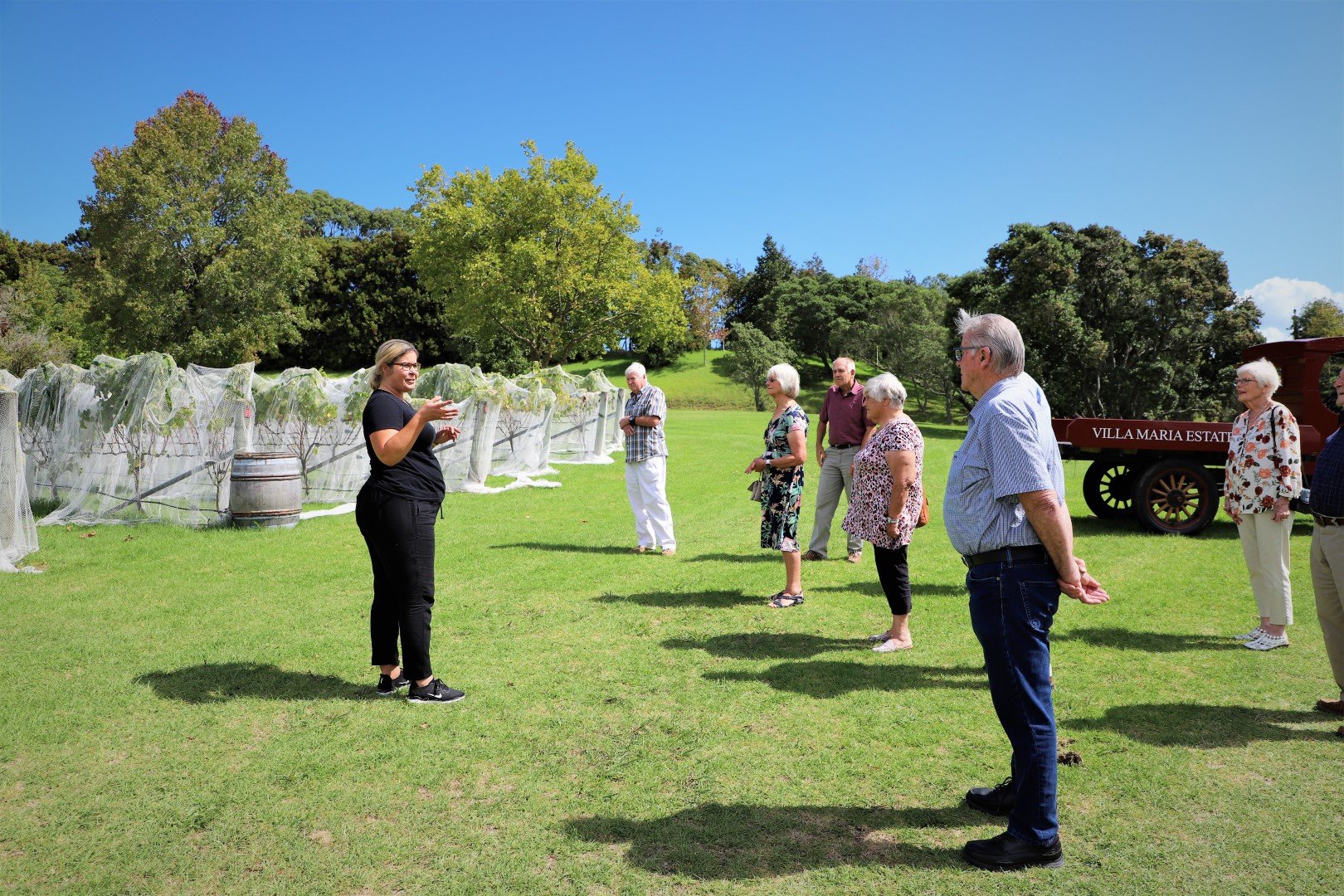 Residents from Bert Sutcliffe, Bruce McLaren and Edmund Hillary enjoy a view of the vines up close

The Auckland residents who visited the Villa Maria winery were treated to a close up of the vines plus a brief overview of the company’s wine-making history by Brand Manager Angela Lewis who led the presentation simultaneously via Zoom.
She had a wealth of knowledge to share having been with the company since 1984 and watching it expand from around 30 staff then to more than 300 now.
Sir George Fistonich, who founded Villa Maria Estate in 1961, was the first person to receive a knighthood for services to the wine industry. He stepped down as CEO in 2018 after 57 years at the helm.
While the group tasted each wine variety, Angela regaled the listeners with insights into how the various grapes are grown and their various characteristics.
“We are still New Zealand’s largest family-owned winery and export to 60 countries around the world,” Angela said. 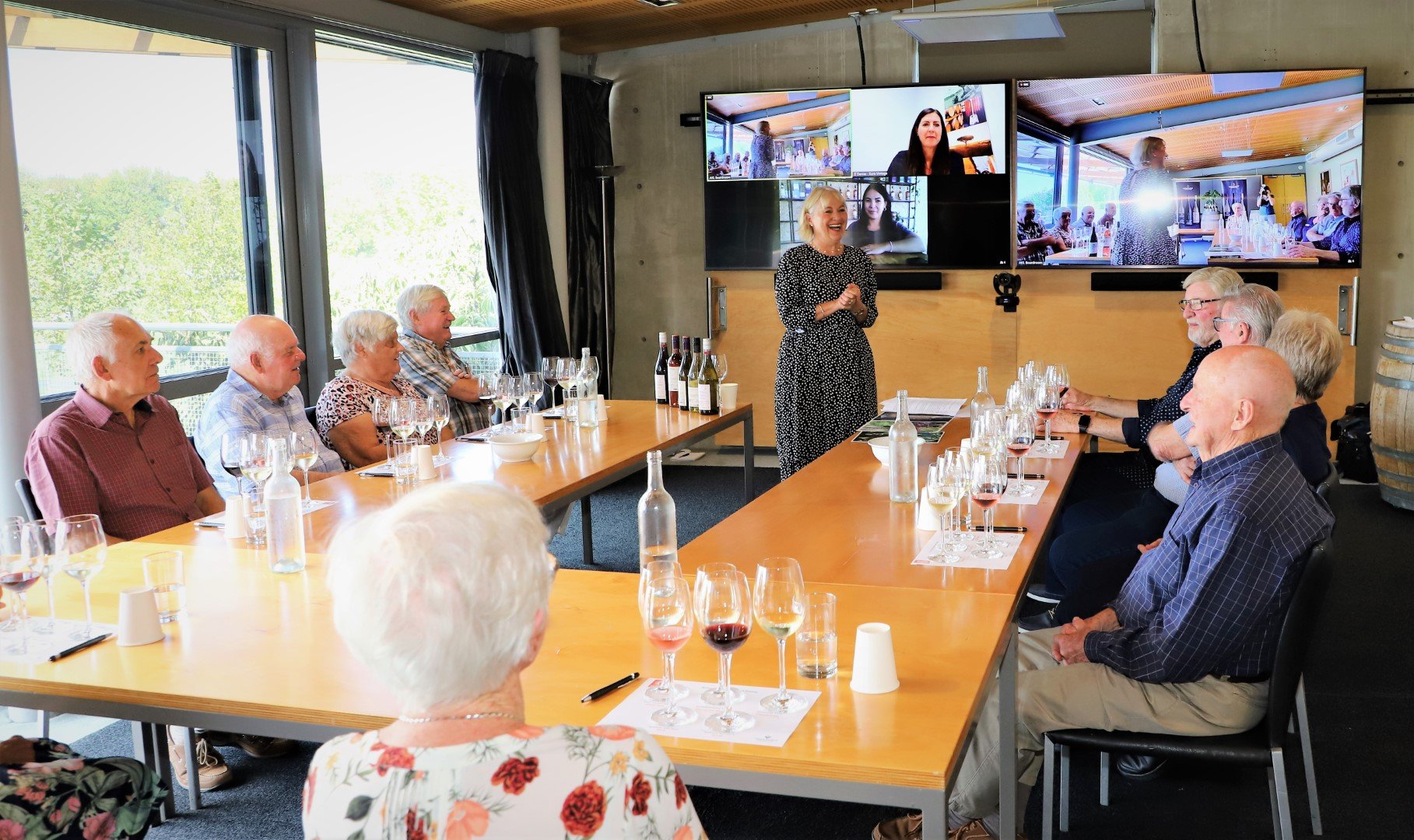 Wine tasting with Angela Lewis in person and via Zoom

The residents Zooming in from the villages sampled six wines from Villa Maria, plus seven from Pernod and two from McGuigans.
There will now be new drinks behind the village bars such as cider and wine-flavoured seltzers which have become more popular, Rachel said.
“It’s a more consistent range with brands that residents identify with and following the feedback we received from our wine surveys, the residents are really looking forward to this new range and choice.”
And that certainly was the case for those tasting them on the day with a unanimous thumbs up vote delivered by all. 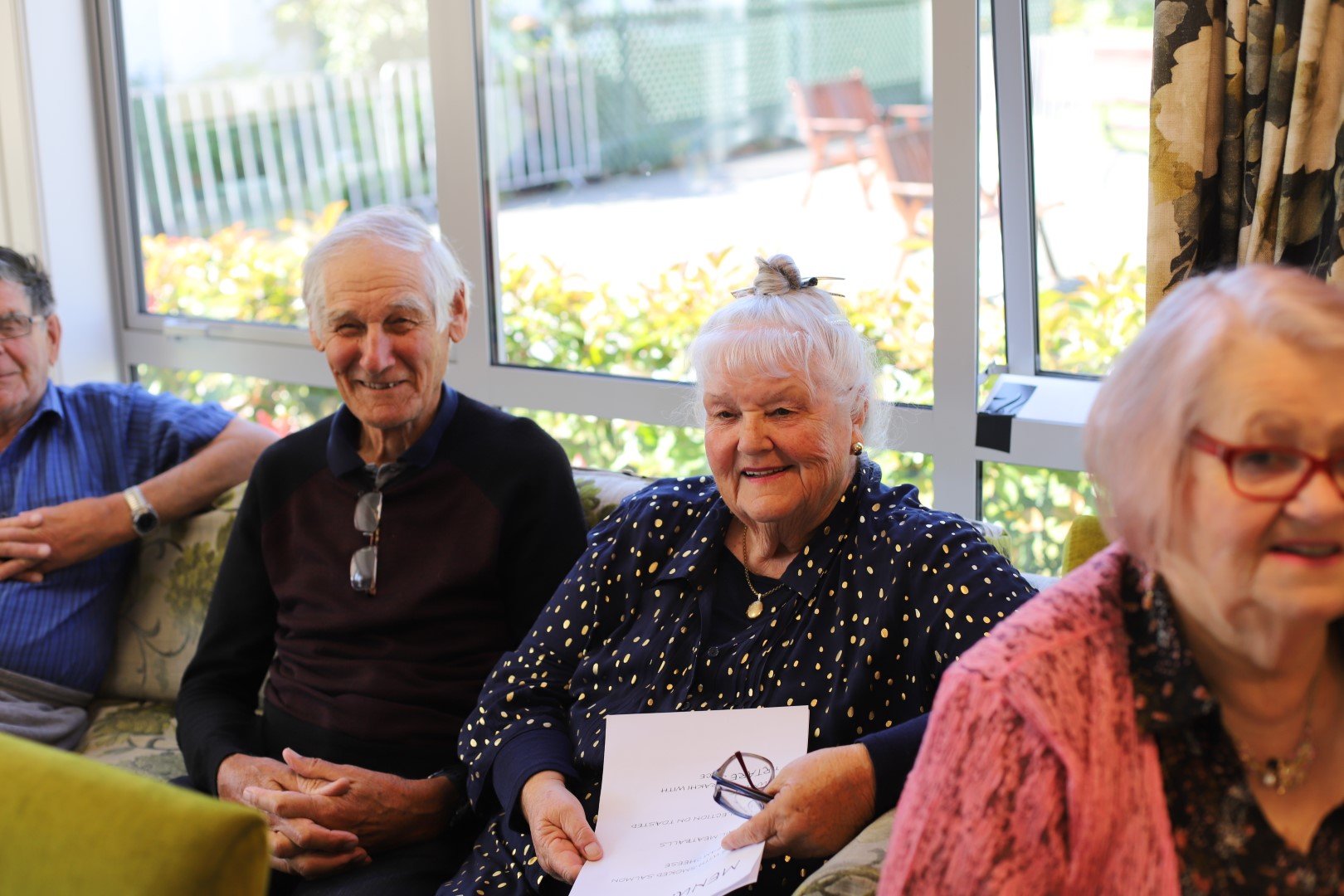 Woodcote Resident Jude Belcher said she and her husband Alan very much enjoyed the tasting, and added it was interesting to sample the Villa Maria wines compared to others they knew.
“We’re from Marlborough and Blenheim so we’re quite interested in wine... I think everyone enjoyed having the different tastes and being able to taste the different varieties.”
Rachel said the good news is, the next wine tasting session has been booked already for June and will continue on a quarterly basis.
There will be a set list of wines, beers and cider, juices and soft drinks for Happy Hour nights and functions, and a special beverage list for Village Host or Club Bar nights.