Keith’s long walk back to fitness

As Hilda Ross resident Keith Cocker sets out on his second walk of the day he is first greeted with some friendly words of encouragement by Village Manager Wendy Taylor.
This boost is soon followed by another when a passing resident stops to tell him how inspired she is to watch his daily efforts.
Keith, who turns 83 at the end of June, is modest in response: “I think some people have found it inspiring, yes. They have seen the improvement I’ve made.”
Indeed, since moving into the resthome last August, Keith has been on a mission to improve his mobility and return to fitness again after being blighted with leg ulcers and a couple of falls which had required him to have both of his hips repaired.
He started off in a wheelchair, initially needing a lot of help from staff, and when the nation went into lockdown and all the usual activities and events were put on hold, Keith had improved enough to set himself a new daily routine.

The concentration is visible on Keith's face as he carefully makes his way around the village.

With a determination and steely resolve that would impress the UK’s Captain Tom, he is now knocking off two walks a day, morning and afternoon, and admits he has doubled the speed he completes them in.
“When I started it would take me about 40-45 minutes but now I can do it in about 20 minutes. I used to time myself by how long I’d have to wait for lunch!”
He adds that nothing gets in the way of his walk, even though the number of fellow residents he encounters has dropped off since the return to Level 1, and of course the temperature has dropped.
“Rain, shine or wind, I go for a walk. I have always been energetic and I don’t like to sit down for long.
“I feel like I have achieved something afterwards,” he says.
And the benefits have been both mental and physical.
“All the walking has helped the healing because my circulation has got better. My goal now is to get this bandage off my leg and improve the walking even more.”
Keith originally moved into the village in 2013 with his late wife Valerie and the couple lived in a townhouse with a big garden area in front of the village centre. 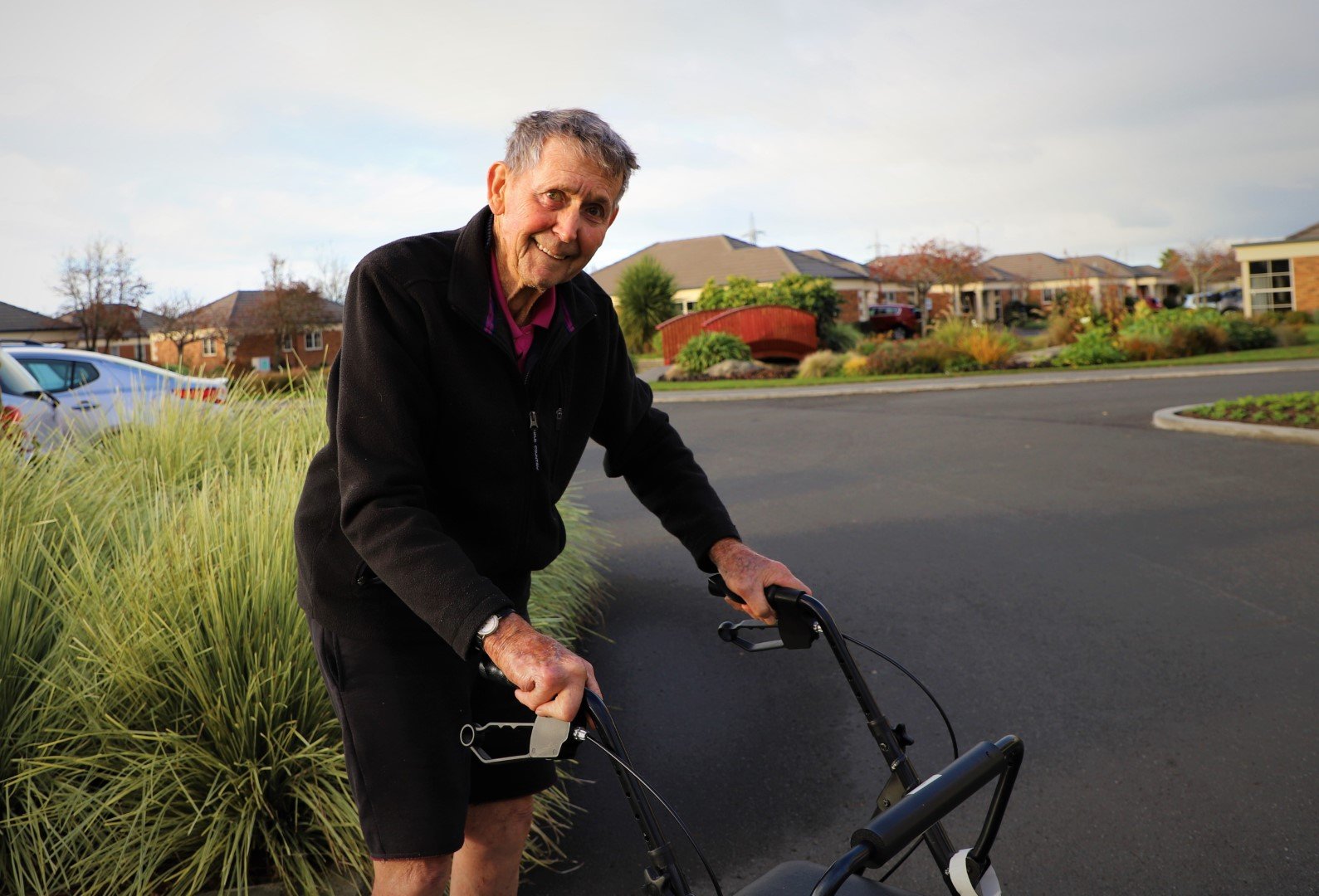 Keith circles the village, passing the townhouse (behind the bridge) which he shared with late wife Valerie.

Once a keen gardener who taught himself how to shape trees into spirals, Keith takes great pleasure at admiring the beautiful village gardens on the way round and is always willing to stop for a chat to whoever’s out.
“I’ve never been lonely since I’ve been in here, and when I’m walking I often meet people I have been on trips with.”
While he still misses Valerie terribly, he has filled his room with his most precious mementos of her.
These include the delicate ornaments carefully painted by Valerie with birds and flowers, one of which Keith made an ornate wooden frame for.
They are displayed on wooden furniture that Keith has either made or restored into things of beauty.
“I like my wood and I used to use my garage as a workshop. I would work on it as a hobby when I came home from work. That and my gardening.”

The former fitter who hails from a small farming settlement called Te Horo, south of Otaki, worked maintaining machinery in various industries and organisations including the railways, the Ministry of Works, the mill at Rotorua, a dairy company and Hamilton Council.
He stayed in many boarding houses and hostels before marrying Valerie in 1965 and shakes his head when he thinks of living standards in them compared to where he lives now.
“It’s a nice environment here, nicely decorated and the staff have been very good – they’re a top team!”
An avid follower of news and events, Keith says he felt glad to be in a Ryman village when he heard Covid-19 had reached New Zealand’s shores.
All visits to the care centre were halted early on, meals were brought to residents’ rooms and activities such as bingo and exercise classes were transferred to the hallway.
Adds Keith: “The hygiene here is really good. I’ve been impressed with how they’re protecting people here.
“This place is number one to me!”