Miriam, who was born in Wellington in 1927, became a well-known face in the Henderson community after she married her husband Assid Corban who served as a West Auckland councillor and Mayor for nearly 60 years.
Both Miriam and Assid are descended from the same Lebanese immigrant, Assid Abraham Corban, who established Mount Lebanon Vineyards in Henderson and made the Corban name synonymous with winemaking.
As well as supporting her husband in all of his civic duties, Miriam was a champion and supporter of a long list of community groups in her own right.
She was a tireless champion for women in the area.Prompted by her own traumatic experience, where she didn’t even know she’d had a son or daughter for three days due to drugs she was prescribed during her baby’s birth, she became an active campaigner for empowering women in childbirth and promoting maternity hospital rooming-in for new mothers and their babies.
So passionate was she about the importance of promoting the opportunity for natural, drug-free childbirth and giving babies the best start in life, she held ante-natal classes in the lounge of her Henderson home and helped form the Natural Child Birth Association which later became known as Parents Centres.

Sharon Alexander, Miriam’s daughter, said it was wonderful to see her mother honoured in this way.
“When you have something named after you it has to be really special, so before giving permission for Ryman to name this village after Mum, I researched their story and the background to the naming of their other 36 villages,” Sharon said.
“The word pioneering is prominent in the Ryman promotional material and Miriam Corban is in good company as a member of a great pioneering family of the west.
“Especially resonant to us is the Ryman ethos ‘everything we do must be good enough for Mum or Dad’.
“The naming of the Ryman village is good enough for Mum, and a wonderful way to honour her for her lifelong service to the community in which she still lives.”

Miriam’s cousin Brian Corban, who is Chairman of KiwiRail, spoke to praise his ‘favourite cousin’, describing her as ‘a pioneer woman and a modern woman’.
“This is a very special occasion for us, as a migrant family who, over 100 years later, are still contributing to the west Auckland community and for her part in that we want to thank my dear cousin Miriam sincerely,” he said. 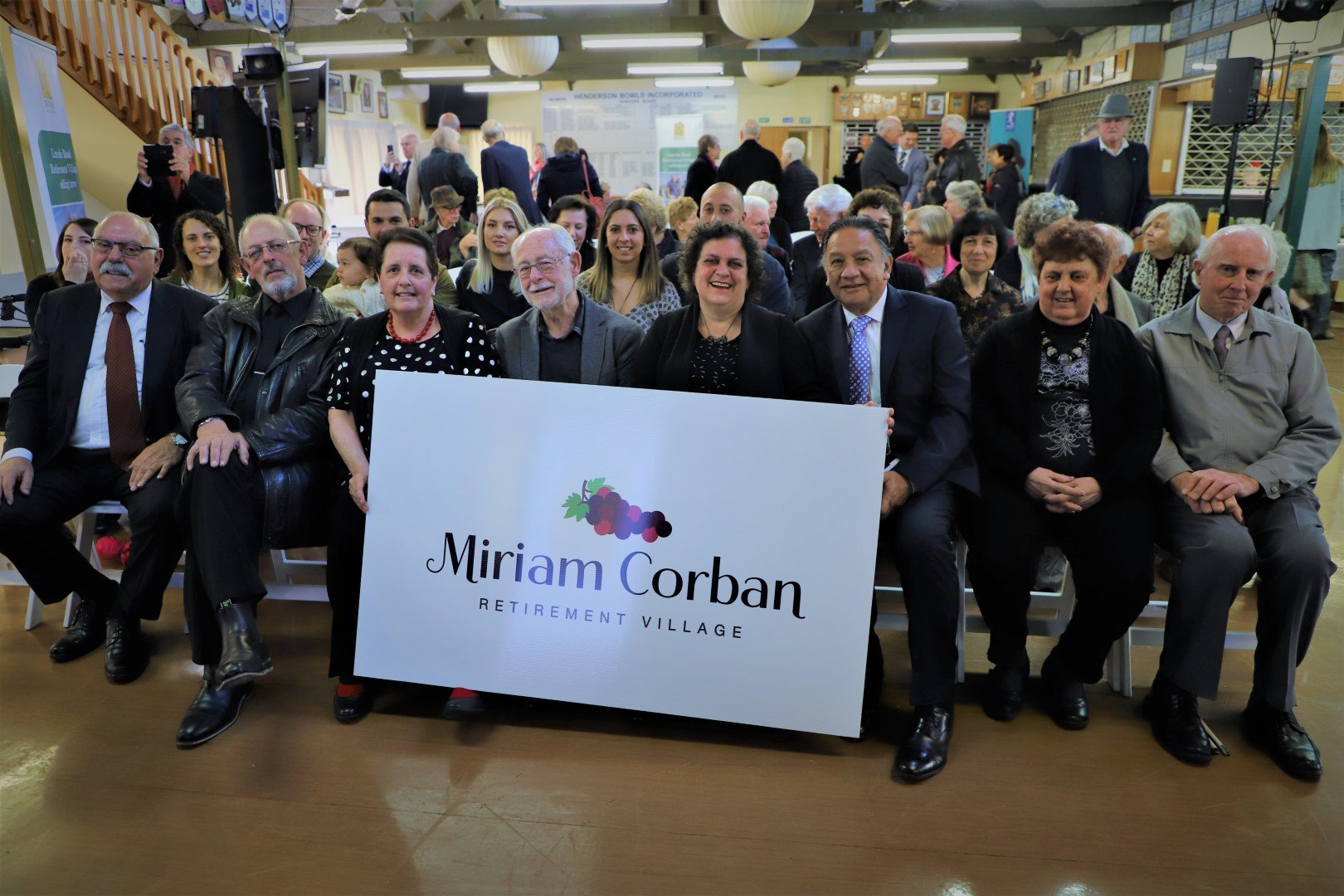 Ryman Healthcare Chief Executive Gordon MacLeod said it was an honour to name the village after such a significant Kiwi.
“The role that Miriam played in improving maternal and ante-natal health cannot be underestimated and has helped to transform the childbirth experience into something unrecognisable from what it was at that time,” he said.
“Miriam’s passion and dedication to family and serving her community is admirable and are qualities that Ryman Healthcare values highly.
“We are thrilled to recognise her achievements and bring attention to her remarkable legacy and we are confident the Miriam Corban Retirement Village will soon became a Henderson landmark.”

Mr MacLeod also thanked George Taua from Te Kawerau ā Maki for performing a karakia to open the event and acknowledged Henderson MP Alfred Ngaro for attending.
Mr MacLeod praised Project Manager Henry Stuart for leading construction of the new Miriam Corban Retirement Village.
Work began in 2019 and its first residents are due to move in next month.
The village will offer a full range of retirement living options with care tailored to each resident’s needs.
The village will include town houses and serviced apartments as well as a care centre with resthome, hospital and dementia-level care options.
Residents will also be able to enjoy an indoor swimming pool, spa, gymnasium, hairdressing and beauty salons, café, movie theatre, library, a bar and billiards room.