Helping maintain a lifetime of history

Vic Ollerenshaw doesn’t mind living next door to a cemetery – he even likes it.

“It’s nice to live next to the historic church – and the neighbours are quiet,” he jokes.

‘The Churchyard’ as the community calls it, is part of the historic 1875 Heritage Listed Hobsonville Settlers’ Church and is situated right next door to one of Ryman Healthcare’s newest retirement villages, named after Keith Park. It’s also the resting place for many of Hobsonville’s early settlers and their families.

But when Keith Park resident Vic struggled to read the writing on a couple of the headstones, he decided he could do something about it.

“I took to one of them with pure old fashioned elbow grease,” says Vic. 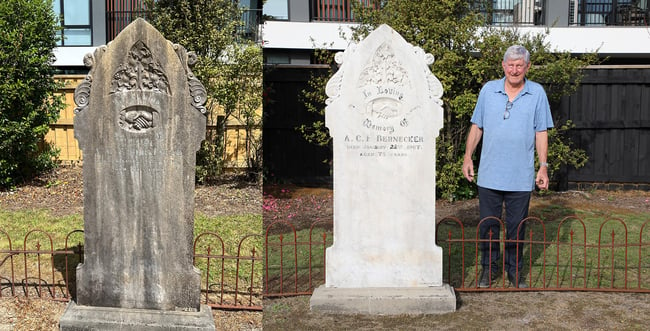 A before and after photo of the headstone Vic scrubbed.

“There is a nearby road by the primary school named Joshua Carder Drive, and his headstone is here in the churchyard, in need of a good scrub.

In addition to Rice Owen Clark, one of Hobsonville’s earliest settlers, all five of the original trustees of the church in 1877 are buried in the graveyard, Joshua Carder, R O Clark Jnr, Joshua Ockleston, Thomas Scott and William Sinton, along with members of other Hobsonville settler families, including Anderson, Boyd, Luckens, Midgley, Williams and Wiseley. 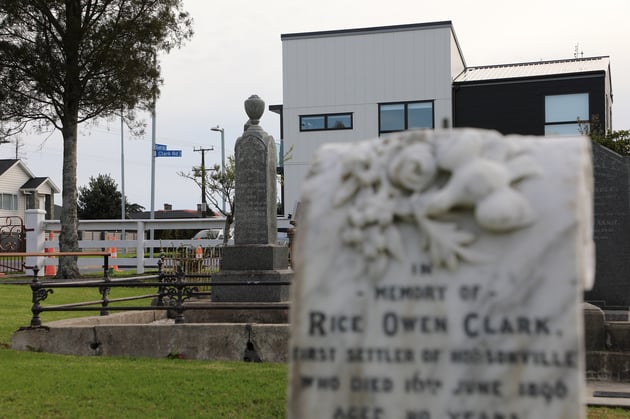 “We are just so appreciative of Vic and his efforts to help us maintain our heritage-listed churchyard,” says Hobsonville Settlers’ Church Secretary Angela Laurenson, who is a direct descendant of the Ockleston line.

“It’s really nice to see people more interested in the history of the local area. Jason Midgley and I have had a programme of work underway for the past nine months to upgrade and refresh the church grounds.

The grounds now boast a brand-new fence, new pathways and garden beds. Park seats have also been installed and the headstones have been sprayed to get rid of moss and lichen. The entrance gates have been repainted too in their distinctive brick red colour.

“The entrance gates are the original 1940s Hobsonville School gates.”

The Church and graveyard are treasured and maintained by the families of those early Hobsonville settlers, however, a few families are no longer in the district. 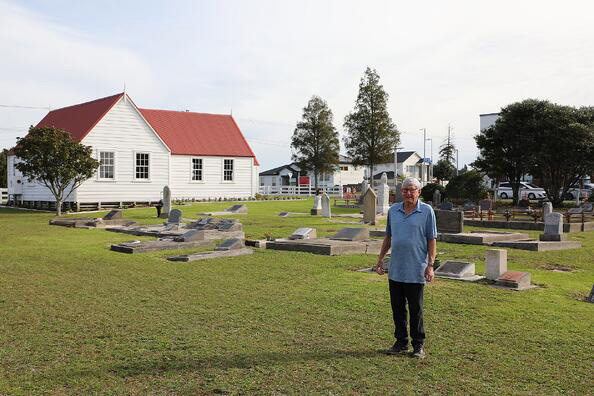 Vic stands in the Hobsonville Churchyard.

“We are very grateful for those Ryman residents who are assisting in looking after the headstones and also keeping an eye on the Churchyard, including Vic, John and Pru Williamson who have been helping with weeding and gardening, and Geoff and Robyn Hickman,” said Angela.

With many of the surrounding roads named after the original settlers, Vic, who has a passion for documenting history, wanted to help in any way he could.

“It’s our community’s heritage, and I wanted to do my bit to help maintain it. I’ll keep going too!

Vic has a passion for history, previously creating a book documenting the first group of residents that moved into the village as the first buildings were built.

“Also - my wife was also sick of me being home all the time,” he laughs.

With many of the stones in need of a good clean, Vic could have his work cut out for him for a while longer.

Any residents interested in assisting with maintaining ‘The Churchyard’ are more than welcome to contact Angela Laurenson and Jason Midgley at hobsonvillesettlerschurch@gmail.com.