It started off as something a bit different to make during lockdown, but now Lyvernne Ambridge and Gill Fewtrell are on a mission to keep making twiddle mats for residents in the village.
While Lyvernne was aware of twiddle mats after seeing them on a craft website it was after talking to one of Gill’s neighbours, whose wife is in dementia care at the village, that they got the idea to make some for the other residents in care.
“That’s how it all came about,” says Lyvernne. “In a week we had one done. He gave it to his wife and she absolutely loves it and has it with her all the time. It’s very rewarding.”
The mats are a basic knitted 65-68cm square folded over and decorated with various colourful and tactile adornments. They are great for keeping residents’ laps warm while offering something to twiddle with. 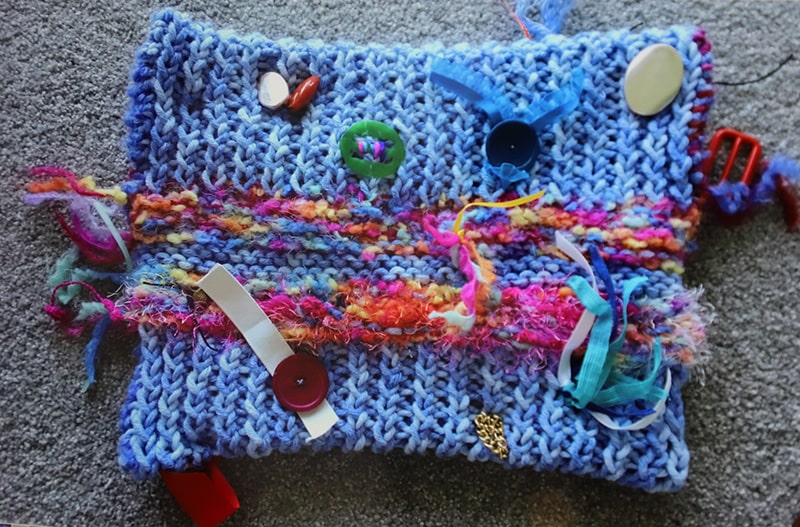 With options for activities somewhat limited during lockdown, Lyvernne says they welcomed a new challenge which served such a great purpose.
“We were already knitting squares for blankets so it was just adding to that.
“It’s amazing how many rows you can do of a night time!”
Lyvernne and Gill put the word out via the village grapevine for any knick knacks such as buttons, ribbons or bits of string or yarn and donations soon came pouring in.
Lyvernne says while some knit the squares, others like to put them together and add the twiddles.

“It’s a real team effort absolutely. I wanted it to be a village effort,” she says, adding that her daughter Rachael has even joined in the production line, using a circular knitting machine to make twiddle muffs.
“More and more people are becoming aware of what they are and when we’re out in the gardens we see some of the residents in wheelchairs with their mats. Because we’ve added a little tape on each corner for their name they have their own personal one which they become very attached to.”

Ryman recently donated some more yarn giving the knitters plenty of scope for more.
The beauty of the twiddle mats was the ability to use your imagination once you had the basics in place.
“It brings out your creative side, working out what to put with what, and which colours. It’s wonderful,” says Lyvernne.
With 12 mats now donated to hospital residents, production is well under way for more thanks to a wealth of knick knacks volunteered by other residents.
“People have been so generous at going through their stuff looking for anything tactile and we’re ever so grateful. And anything we haven’t been able to use for these has gone to the craft group for other projects.
“We’re all just helping each other which is absolutely imperative in my book.”