Ryman Healthcare’s full year underlying profit rose 11.5% to a record $227 million driven by increased development margins and solid demand. Momentum grew during the year with four large new villages progressing and Ryman has a record landbank to develop after acquiring six sites in the year.

Audited reported profit after tax, which includes unrealised fair value gains on investment property, was $326 million, down 16% from $388 million.

Underlying profit was within the range of $223 million to $238 million forecast at half year, and is in line with the market consensus.

Shareholders will receive an increased final dividend of 11.9 cents per share, taking the total dividend for the year to 22.7 cents per share, in line with the increase in underlying profit. The dividend will be paid on June 21, the record date for entitlements is June 7.

The growth in underlying profit was driven by strong development margins, particularly from Ryman’s second village in Melbourne.

Only 1% of resale stock was available at year end, and care occupancy in established villages remained above 97% during the year, well above the industry average of 87% in New Zealand.

Operating cashflows were up 15% to $401.4 million, and cash receipts from residents exceeded $1 billion for the first time.

“We are pleased to report it has been a solid year given the current trading environment which has included challenging market conditions.

“These have not put a dent in our plans to invest for the long term in our villages and in improving life for residents and staff,’’ Dr Kerr said.

Ryman invested $552 million in new and existing villages during the year, up from $478 million last year. Net assets are now at $2.2 billion, up from $1.9 billion a year ago.

“We invested heavily in care, service improvements for residents, refurbishing older villages and in increased pay, particularly for nurses. While these investments cost us in the short term, we think they will result in happier residents and team members who remain loyal to Ryman.’’

“Our latest surveys show that our people are happier than ever, and we are introducing innovations which we think will make our villages even better to live in.’’

“We are rolling out new village hosting services, a new meal service for independent residents, and a new approach to dementia care. We are also trialling a taxi and car sharing service, an electric car charging network in Auckland and new generation solar-powered townhouses.’’

Ryman was named the Most Trusted Brand in the aged care and retirement village sector in New Zealand for the fifth time, and its myRyman application won a top accolade at the 2019 Asia Pacific Eldercare Innovation Awards in Singapore last week.

Ryman has a record land bank, with 7,000 beds and units at 20 new villages either under development or in the planning and design stages.

Six new sites were added during the year at Aberfeldie, Ocean Grove and Ringwood East in Victoria; Kohimarama in Auckland; and Bishopspark and Riccarton Park in Christchurch. 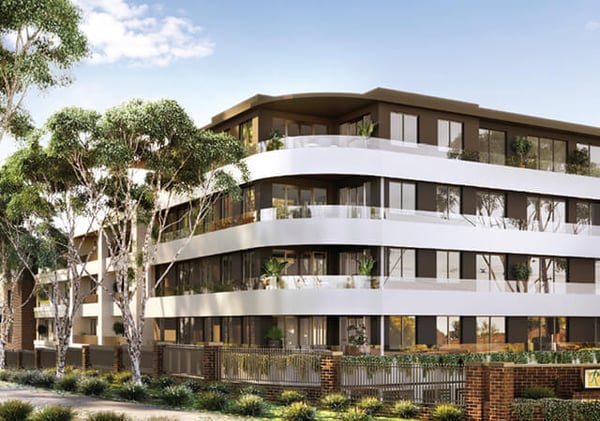 Above: Proposed village in Burwood East

“There will be a lot of momentum as new villages come through over the next few years. We have four large villages selling in Melbourne, Auckland and Hamilton and we expect to have 12 sites under construction in the next 12 months. We are about to move into our biggest ever build programme,’’ Mr MacLeod said.

While resale volumes were flat, Ryman ended the year with only 1% of resale stock to sell.

“There is no shortage of demand. We ended the year with our busiest March on record, and we are expecting that momentum to continue in the coming year,’’ Mr MacLeod said.

Ryman announced changes to its development team, with Chief Development Officer Andrew Mitchell moving into a consulting role to assist with special projects.

“Andrew has made a significant contribution to Ryman over the past 12 years and has built a strong team which will continue to drive our expansion in New Zealand and Victoria,’’ Mr MacLeod said.

Jeremy Moore, a senior member of the development team for the past seven years, has been named Acting Chief Development Officer.

Dr Kerr said the focus remained on preparing for the extraordinary demand ahead as the populations in New Zealand and Victoria continued to age.

Ryman was on track to have five villages open in Victoria by the end of 2020. With the build programme ramping up, Ryman reaffirmed its medium-term target of doubling underlying profit every five years.

“We will continue to monitor the market closely – we have been in business for 35 years and through many cycles before. Our mission remains the same. We want to continue to build trust by providing the best of care in vibrant communities. We will continue to expand and invest so we can meet our social purpose of taking Ryman communities to as many people as possible.’’