The site has been purchased from Ngāi Tahu Property, and forms part of the company’s Karamū development.

Ryman has also confirmed the purchase of Anglican Care’s Bishopspark Retirement Village on Park Terrace, overlooking Hagley Park. The 1.2-hectare site suffered significant damage in the Christchurch earthquakes and will be completely redeveloped.

Ryman will assume all of Anglican Care’s obligations to residents and has offered homes to them while Bishopspark is redeveloped. 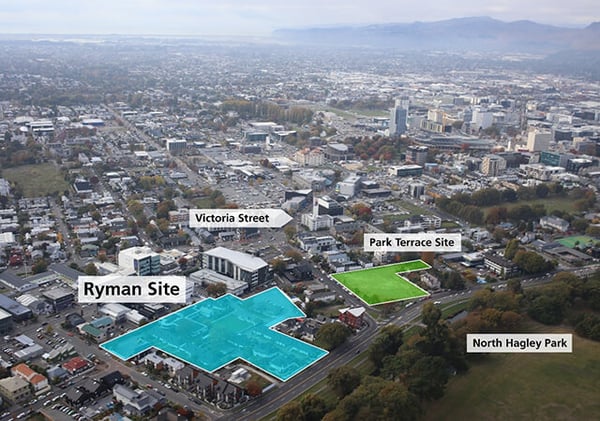 Both purchases are subject to gaining approval from the Overseas Investment Office.

Chief Executive Gordon MacLeod said he was delighted with the purchases in prime areas in Ryman’s home town.

“We think both sites have huge potential for residents. The site at Karamū, Riccarton Park overlooks the racecourse and will provide great views across to the Port Hills and Southern Alps.

“Bishopspark is in a beautiful location on Park Terrace overlooking the Avon and Hagley Park in the centre of Christchurch and is a short distance from our existing site. We are currently reviewing plans to have one village operated across both sites.

“Both villages will provide independent and assisted living options as well as care centres with resthome, hospital and dementia-level care.

“Christchurch has an ageing population and we think both these villages will be in strong demand.’’

The villages will be worth more than $220 million combined and will include indoor swimming pools, movie theatres, cafes, hair and beauty salons and a bowling green.

They will create significant construction jobs, as well as long-term sustainable jobs for about 370 staff.

Ryman was founded in Christchurch in 1984 and has grown to become one of the city’s largest employers, and care and retirement living providers.

Ryman has been voted the Most Trusted Brand in the aged care and retirement sector in New Zealand five times.

“There’s nothing like a bit of local knowledge and we’ve found over the years that the best suggestions come from the people who know the place well. We’d love to hear any suggestions and to name the villages in honour of respected locals.’’