Ryman Healthcare has had a record start to the year and has announced the purchase of a large new retirement village site in Melbourne.

Group Chief Executive Gordon MacLeod told shareholders at Ryman’s annual meeting in Wellington that its villages were in strong demand.

“We’ve had a record start to the year, with cash receipts of $403 million in the first quarter, up 82% on the COVID-impacted first quarter of last year,’’ Mr MacLeod said.

“It’s the best first quarter we’ve ever had. We transacted the highest sales value and volume of occupation right agreements we’ve seen in a first quarter, and occupancy at our established care centres was running at 97%.

“When you consider we had a record final quarter of sales in the 2021 financial year, it adds up to a great six months for Ryman, the strongest I’ve seen in my 15 years at the company.’’

Ryman has bought a new site at Mulgrave in south-east Melbourne which will be developed into the company’s twelfth village in Victoria.

The 4.6-hectare site will include villas, apartments and an integrated aged care centre and has an existing approval for a retirement village development for more than 350 residents.

Ryman opened its first village in Melbourne in 2014 and now has five operating in Victoria. Ryman has 1021 residents in Victoria and 659 staff.

Work is continuing on new villages at Aberfeldie and Highett, and there are another five villages in the pipeline in Victoria.

Mr MacLeod told shareholders that 97% of Ryman’s build programme for the next two years had resource consent or development approval, giving it a strong runway for growth. 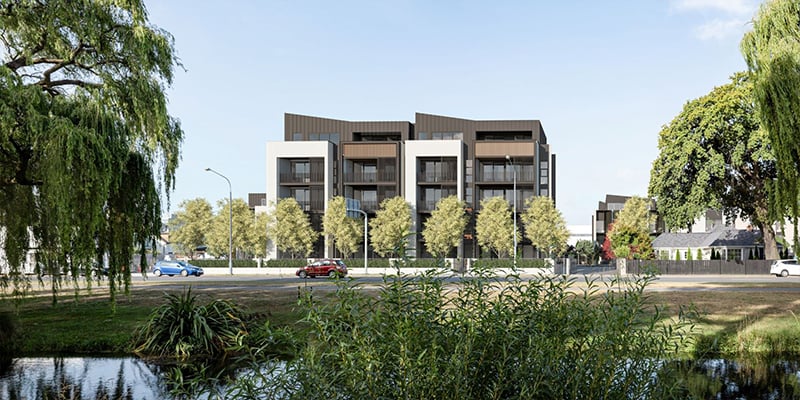 An artist's impression of the Park Terrace village, to be built in Christchurch.

Ryman’s landbank includes 4,007 units and beds in New Zealand and 2,399 in Victoria.

Chair Dr Kerr said Ryman had delivered more than 24,000 COVID-19 vaccines to its residents and team members, and Ryman’s vaccination teams were being used by other retirement village providers to vaccinate residents.

Dr Kerr thanked Ryman’s team for the ongoing work to keep the company’s 12,750 residents safe from the virus.

“We’ve kept our residents and team safe from COVID-19, continued to grow and develop, and we have tremendous cause for optimism thanks to the availability of vaccines.’’

Mr MacLeod said Ryman would continue to invest in the resident experience.
Ryman is supporting the New Zealand and Australian Olympic Committees and is holding its own games tournament, with 700 residents competing in swimming, cycling, bowls, relay walking and quiznastics across 42 villages on both sides of the Tasman.

The residents can compete with each other using Augmented Reality and Artificial Intelligence, and Ryman residents have pioneered the world’s first game of remote bowls, competing in the same game 951 kms apart on two greens.

Mr MacLeod said Ryman’s momentum was gathering, and it would soon have 14 villages on the go – seven on each side of the Tasman.

“If you take into account our entire landbank, we have 26 villages on the go or in pipeline, which we are anticipating will generate $5.5 billion of cash proceeds and recurring income of $420 million.’’

Greg Campbell, Ryman’s newest director, has been elected as deputy chair, replacing Warren Bell. Mr Campbell will assume the role following the annual meeting. Mr Bell will continue to serve on the board as a director, and Dr Kerr thanked him for his contribution in the deputy role.

Dr Kerr also thanked shareholders at the meeting for their continued support.

“In the short term our focus is to continue to do everything we can to keep the Ryman family safe from COVID-19 and to complete our vaccination programme.

“Our long-term aim is to build as many Ryman communities as we can to meet growing demand. They will create new homes, critical healthcare infrastructure and new jobs. We are as optimistic as ever about the future of Ryman.’’

Thirteen sites in the land bank: