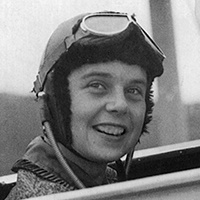 Pioneering is part of who we are. That’s why each Ryman village is named after a Kiwi or Aussie trailblazer, Jane Winstone, Evelyn Page, Sir Edmund Hillary to name a few. They lived with passion and purpose, they pushed further, they went beyond the ordinary. That’s exactly what we strive to do, every day, at Ryman. To pioneer a new way of living, for a new retirement generation.

Jane Winstone was born in Whanganui and at age 16, while still a pupil at Sacred Heart Convent, she took up flying as a hobby, travelling to New Plymouth and Hawera for lessons, until an aero club opened in Whanganui. She flew solo at 17, becoming the country’s youngest female pilot at the time.

Jane was keen to help the war effort and offered her services to the Air Transport Auxiliary (ATA) in Britain.

A talented pilot and a courageous woman, Jane Winstone was one of 16 women from the ATA killed during the war, when the engine of her Spitfire failed after takeoff. She is buried in the Maidenhead Cemetery, Berkshire, England.