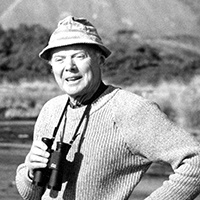 A leading scientific figure and active participant in forming the Ornithological Society of New Zealand, Sir Charles Fleming dedicated his life to researching and advocating for the preservation of New Zealand flora and fauna. As a geologist, ornithologist, avian palaeontologist and environmentalist, Charles contributed greatly to the research of New Zealand’s cicadas, diverse birdlife, and ocean environment.

Charles spent nearly all his free time exploring his natural science interests with immense curiosity and commitment. He regularly published scientific papers of significance and was a lifelong supporter of the Royal Society of New Zealand.

His passion for the New Zealand environment naturally led Charles to conservation. His success was fuelled by an ability to cross interdisciplinary boundaries and communicate his findings beyond the scientific community. This combination of skills made him an impactful spokesperson for the Native Forest Action Council and the Royal Forest and Bird Protection Society of New Zealand.