Surround yourself in a peaceful & tranquil setting

Find out more about this serviced apartment

Find out more about this completely new one-bedroom apartment

New with a view

Find out more about this one bedroom apartment 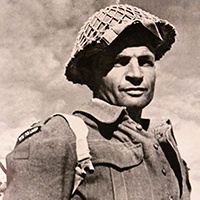 Fiercely loyal, determined, and selfless, Charles Upham was the only combat soldier to earn the Victoria Cross, the Commonwealth’s highest award for gallantry in the face of the enemy, twice. Due to his exceptional bravery, Charles is the most highly decorated Commonwealth soldier of World War II. He’s remembered for his staunch commitment to his fellow soldiers and his country.

While valiant, Charles was a humble man. When he heard of his first Victoria Cross award, he stated “It’s meant for the men”. Later, when King George VI remarked how unusual it was for someone to be awarded a bar to the Victoria Cross, Major-General Howard Kippenberger replied, “In my respectful opinion, sir, Upham won the VC several times over.”

The fearlessness Charles displayed on the battlefield was mirrored during his time in various German prisoner of war camps. He was labelled ‘dangerous’ following repeated escape attempts including jumping from a train at high speed. When the Americans liberated the POW camp where Charles was interned, he promptly joined an American unit ready to fight again but was instead sent to Britain for the final five months of WWII.

Upon his return to New Zealand, affluent community members raised £10,000 for Charles to buy a farm. He respectfully declined. Instead, the money founded the C. H. Upham Scholarship for children of ex-servicemen to study at the college of Canterbury or Lincoln University. His persistence and bravery are documented in the biography Mark of the Lion by Kenneth Sandford.