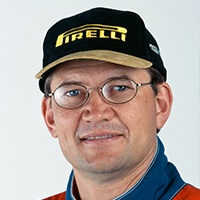 Pioneering is part of who we are. That’s why each Ryman village is named after a Kiwi or Aussie trailblazer, Possum Bourne, Grace Joel, Logan Campbell to name a few. They lived with passion and purpose, they pushed further, they went beyond the ordinary. That’s exactly what we strive to do, every day, at Ryman. To pioneer a new way of living, for a new retirement generation.

Bourne was best known for his exploits in the Subaru Impreza WRX. He drove for the Subaru World Rally Team in Rally New Zealand, Australia and Indonesia, before going on to win multiple Australian titles with his own team.

He earned the nickname, "Possum", after the night he crashed his mother's Humber 80, whilst trying to avoid a possum in the middle of the road.

In 2003, he was involved in a serious car crash after his car was struck by another competitor while he was preparing for a race, and he died in Dunedin Public Hospital.

Bourne lived in Pukekohe, Auckland, near his workshop, with his wife, Peggy Bourne, and three children, Taylor, Spencer, and Jazlin. When locals were asked for suggestions as to what to name Ryman's new Pukekohe village, the name Possum Bourne was a clear winner.

Peggy Bourne said she was sure her late husband would have been honoured by the naming.

“Possum was born and raised in the region and it was his home. It was where he based his rally team and wherever he went in the world he always wanted to return to Pukekohe.’’

“It’s a great honour for us as his family, because it recognises that he always tried to put as much back into Pukekohe as he could. He loved the place and he would be really proud of this honour.’’