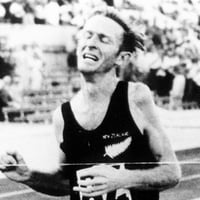 Pioneering is part of who we are. That’s why each Ryman village is named after a Kiwi or Aussie trailblazer, Murray Halberg, Rita Angus, Jane Winstone to name a few. They lived with passion and purpose, they pushed further, they went beyond the ordinary. That’s exactly what we strive to do, every day, at Ryman. To pioneer a new way of living, for a new retirement generation.

Murray Halberg became a household name in New Zealand in the 1950s and 1960s as a talented long-distance runner who achieved a string of successes on the athletics track.

Sir Murray's greatest success came at the Rome Olympics in 1960, when he took gold in the 5000 metres.

He also won the three mile event at the Empire Games in Perth in 1962 and set world two and three mile records. He was also the first New Zealander to run a mile in under four minutes.

Sir Murray put the fame he gained through athletics to good use.

In 1963 he founded the Halberg Disability Sport Foundation with the aim of ensuring that all New Zealanders, regardless of their ability, should have equal opportunity to enhance their lives through sport and recreation.

Since 1963, Sir Murray and his Foundation have worked tirelessly to make that vision a reality for New Zealand's physically disabled people and has helped thousands of children realise their dreams through sport.

He is also the name behind the annual Halberg Sports Awards, New Zealand's premier annual awards event. He spotted the potential to revitalise what were the New Zealand Sports Awards in the 1960s, turning them into a highlight of the country's annual calendar.