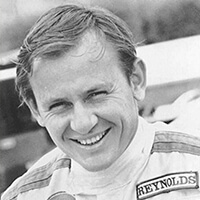 With a combination of uncompromising determination, passion, and talent, Bruce McLaren continues to have a significant impact on the international car racing industry. A race car designer, driver, engineer, and inventor, Bruce founded and raced in one of the most successful Formula One championship teams in history.

Growing up around his parent’s service station and workshop, Bruce went on to dominate Formula One championships. He achieved his first international win in the 1959 United States Grand Prix. Aged 22, he was the youngest Grand Prix winner at the time. He continued to place on the global stage, including wins in the 1960 Argentine Grand Prix, 1962 Monaco Grand Prix, 1966 24 Hour Race at Le Mans, and the 1968 in Circuit de Spa-Francorchamps. While Bruce achieved highly as a driver, his legacy, the McLaren Racing Team, came from his design and engineering skills. He founded McLaren 1963.

One ingenious insight occurred mid-race when a fuel filler door was flapping. Initially angry that the door hadn’t been properly closed, Bruce realised that the air pressure under the door was clearly stronger than the airflow above it. He grabbed a pair of shears from the pits and cut the bodywork away behind the radiator mid-race. Immediately, his lap times were faster. McLaren’s iconic ‘nostrils’ were born.

At the age of 32 Bruce died doing what he loved. He crashed at the Goodwood Circuit in England testing his new McLaren M8D. Bruce’s story is documented in his 1964 book From the Cockpit and in the 2017 documentary film McLaren directed by Roger Donaldson.