Your online destination for an active body and stimulated mind.

Tour the far north with Mary

Platter tutorial by Manu from The Soc...

Cindy and Del ‘Doing it while they can’ The pair have a motto. “Do it while you can.” And they’re living up to it with relentless enthusiasm.

When Cindy and Del aren’t on their bikes, you’ll find them planning their next epic cycling adventure. Or playing bowls. Or creating charcoal art. Or learning to dance. These two don’t sit still.

The pair “didn’t start cycling until we turned 70”. It began with Del sitting on the stationary bike at the gym. “Out the window, I saw two fellows going somewhere on their bikes. I thought ‘that’s sensible’.” Cindy quickly realised that “if I didn’t get a bike, I’d be home all alone wondering what my husband was doing. So, I got one as well”.

Del laughs that it wasn’t smooth sailing, to begin with. “We hadn’t cycled for 50 years, but I got a light road bike with clip-in pedals and thought, ‘I can handle that’. But there I am in slow motion, collapsing on the side of the road. So, we gave up and now we wear ordinary shoes.” Soon after, they sold the road bikes that “couldn’t stand up to the punishment we were giving them”, opting for aluminium frame bikes. 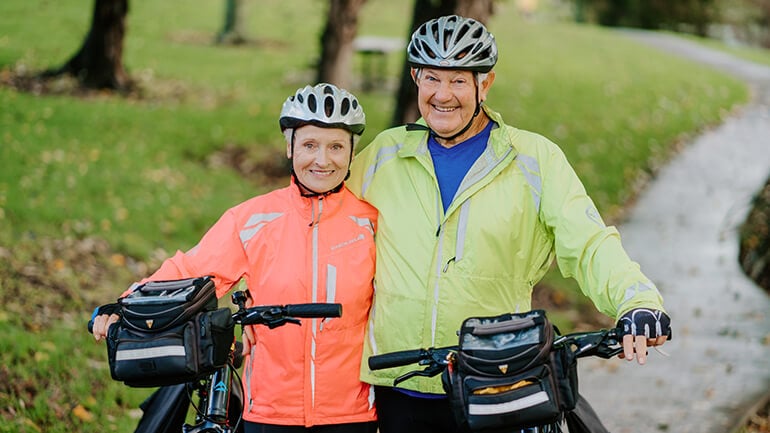 The first big adventure was Del riding from Cape Reinga to Bluff. Cindy declined the offer to ride with him, so he went self-supported. Cindy thought that was the end of it. “Then he decided to cycle the Nullarbor Plain in Australia.” She had been nervous enough during the last adventure, “I wasn’t going to let him do it again, so I got a bike and got going as well”.

Del explains that “being self- supported” on the Nullarbor ride “was important to us. It meant that we weren’t obliged to be anywhere at any time with anybody else. We weren’t holding people back. If we decided we’d had enough we could just pack up and go home”. And that has been the case ever since. “We go on our own, no support vehicle, we carry everything with us on our bikes, and the same rule still applies – we can pack up and stop whenever we want.”

But they’ve only had to abandon ship once. 400km short of completing their 6,500km Cairns to Perth ride, Cindy broke her shoulder. “We were in the middle of nowhere in Western Australia. It was wildflower season and everything was covered in beautiful yellow and pink wildflowers, as far as the eye could see. I was zooming down a hill at great speed, enjoying the view, and I hit a pothole. The weight of the trailer threw everything off and I went hell for leather into the tarseal with my face.”

Stopped just a few hundred kilometres short of their goal, the pair had covered significant ground already. “We went from Cairns to Perth. Right across Australia to Broom, then down the coast to nearly Perth. We estimated 6,500kms and had done 6,100kms when we had the accident”, says Del. That trip took 100 days including rest days. “We would go for 10-12 days at a time then have a couple of days rest.” And they had to time their distances carefully to balance how much water and food was required with how much weight they could carry. “It took months of planning to get it right. And it went pretty well.” 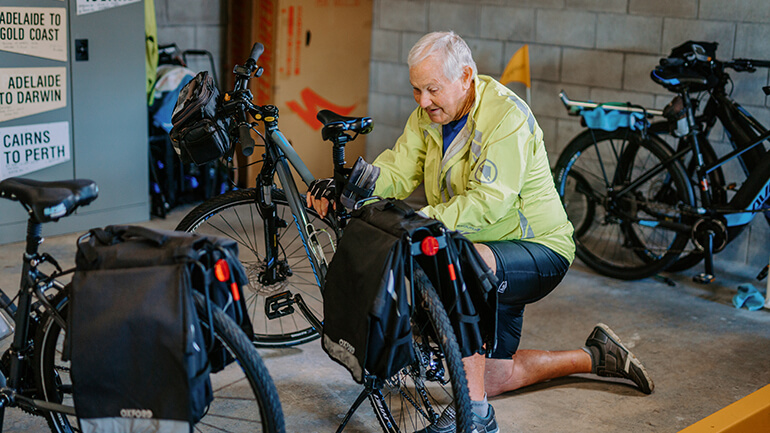 But there’s more to consider than food and water. Del says, “it’s a mental challenge too. Can we actually go through the hard times? Because it’s not all sitting on a bike going ‘hey, this is nice’, there are times when it’s hard”. Cindy laughs that her main problem was a sore behind!

Safety and wildlife were also factors. They had to watch for curious roaming cattle, push through any available bush on the arid Australian plains to find a camping spot hidden from the road, then tackle the snakes, spiders, and wild dogs. “We had an incident with a dingo.” At one camping spot, a man pulled up in a truck. “During the night he started hollering, ‘Everyone’s got to go! A dingo ripped my tent and stole my food!’ He threw everything in his truck and took off. But we had nowhere to go!” They moved the food into the middle of their small tent and spent a nervous night listening for dingoes. “In the morning, there were dingo prints all around the tent.”

So, what do their family and friends think of Cindy and Del regularly cycling 100 kilometres a day, self-supported, in the middle of nowhere? “People think we’re mad!” But that won’t deter these two, they’re hooked on cycling and determined to ‘do it while they can’. As Cindy says, “it’s the feeling of freedom, to go where you want to go”. 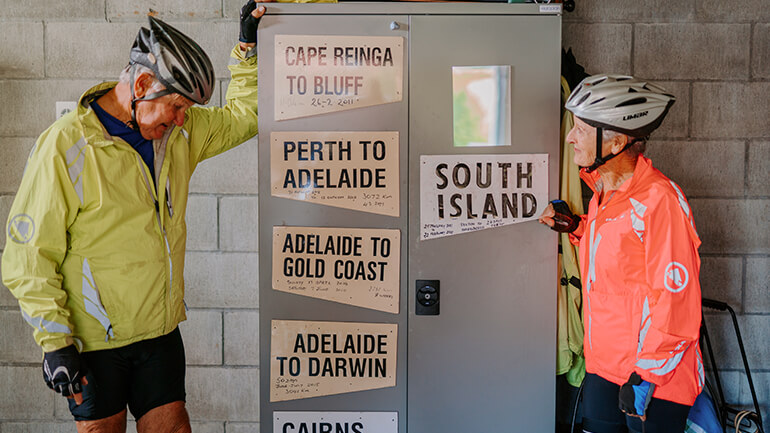 Special thanks to Cindy and Del. Cyclists, adventurers, and residents at Ryman’s Possum Bourne Village.

How to break free from loneliness